In the wake of the Dallas shooting rampage that left five police officers dead and another seven wounded, Black scholars took to social media and cable network news programs over the weekend to provide historical context and analysis of what has been described as the deadliest attack on American law enforcement since 9/11.

The role of the Black scholars became more salient after news reports surfaced that showed the alleged perpetrator—a 25-year-old former Army reservist named Micah Xavier Johnson—wearing an African dashiki with a raised fist, generally understood as a symbol of “Black power.” The reports also seemed to suggest that Johnson embraced ideals and individuals seen as “Afrocentric.” 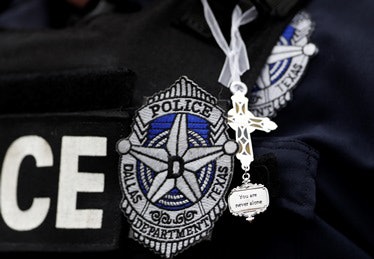 Photo courtesy of the Associated Press.

Although Johnson was not a part of the Black Lives Movement and was, reportedly, critical of the movement, the images of Johnson triggered concerns in some quarters about the extent to which the Black Lives Matter movement had created an environment that led to the shootings.

Johnson had reportedly told police negotiators that he was upset at White people and upset over the two back-to-back videotaped incidents of Black men being shot to death earlier in the week by police officers in Baton Rouge, Louisiana, and St. Anthony, Minnesota. Johnson allegedly opened fire on the officers he wounded and killed at a Black Lives Matter protest Thursday night in Dallas. He was killed by a bomb-carrying robot afterward.

Imani Perry, the Hughes-Rogers Professor of African American Studies and faculty associate in the law and public affairs program at Princeton University, deflected assertions that the incident shows African-Americans are headed toward racial violence.

“400 years of US history demonstrate vast& overwhelming majority of Blk ppl do not believe in racially targeted violence,” Perry tweeted.

“This has been the case through enslavement, Jim Crow, lynchings, beatings, police brutality and murder…,” Perry continued. “The counter examples are so rare as to be statistically insignificant.

“So to frame this conversation around a threat of Black retaliation as a collective project is historically and presently dishonest…,” Perry stated in her series of Tweets. “The history of Black organizing, protest, activism & resistance has overwhelmingly been one that maintains fundamental respect 4 ppl period.”

Molefi Kete Asante, professor of African American studies at Temple University—who happened to be in Dallas in the wake of the shooting, preparing to give a talk on African education, culture and politics—took umbrage to media reports that sought to connect Johnson to Afrocentricity, one of Asante’s areas of expertise.

“Nothing in Afrocentricity is about killing anyone,” Asante tweeted as he criticized a cable news network’s reference to Afrocentricity “without meaning and context.”

“So they say Micah X’s page was Afrocentric,” Asante continued. “do they mean that he was interested in his history, the lies about Africa, why was he so angry?”

“It’s a Marxist organization, all about Black liberation,” Swain said during a “Race in America” segment on CNN.

As for the shootings of the two Black men that apparently motivated Johnson’s shooting rampage—Alton Sterling in Baton Rouge and Philando Castile in St. Anthony—Swain was unmoved by videos of their fatal encounters with police.

“Videos don’t tell the entire story,” Swain said. “If you look and dig further, in the case of the shooting in Louisiana, the guy was a convicted felon.

“He had an illegal gun and he resisted arrest,” Swain said. “And so we get part of the story.”

“You just suggested that the shooting of Alton Sterling is justified because he had a prior criminal record,” Martin said. “They had no information about his record. Simply because you have a criminal record doesn’t mean your life is less valuable in this system.”

Swain would not relent, saying, “They knew he had a gun and it turned out to be an illegal gun.”

In the case of Castile—whose fiancee, Diamond Reynolds, livestreamed the aftermath of the shooting on Facebook—Swain noted that there’s another video in which Reynolds is seen smoking marijuana in a car with a young female child in the background.

“So we have to look at the credibility of the witness,” Swain said. “We need to not rush to judgment and I found the media, they’re putting too much focus on the video before we have the facts.”

Swain said that, while Blacks represent only 13 percent of the population, they are responsible for 37 percent of violent crimes and more than eight times as likely to commit homicide.

“So when a police officer approaches a Black person, I’m sure—if it’s in the inner city—they have that in the back of their minds,” Swain said. “One reason why more Blacks die in these encounters is because they are more likely to resist arrest.”

Michael Eric Dyson, the prolific author and professor of sociology at Georgetown University, asked during the PBS NewsHour: “Why is it that there’s a vicious repetition of patterns in certain communities and not others?”

“We must see each other as human beings,” Dyson said. “We must acknowledge the difficulty of the job that the police have to do but also respect the humanity of those people.”

Dyson suggested that both law enforcement and community members need to bridge the divide that exists between the two.

“When we see this week, the tragic loss of life of those police but, before that, two Black victims that did not deserve to die, and we would expect the police to say this is wrong, this is a scurrilous and insensitive offense to any American, when we see the police empathizing with that, then those who empathize with the police can bridge that gulf, and together we can address the issues that need to be addressed,” Dyson said.

Perry, the Princeton professor, said she did not know what to make of the images of Johnson in a dashiki with a raised fist or shaking hands with Professor Griff, the Public Enemy rap group member who writes and lectures within what is known as the “conscious community.”

“But I grew up with a lot of activists, Black Panthers, New Afrikans, Revolutionary socialists,” Perry told Diverse. “And this doesn’t indicate anything about a thoughtful meaningful political action to me.

“It looks to me like the media is painting it that way to demonize political militancy. But we really don’t know,” Perry said. “And ultimately I think such comparisons can only be made with information we don’t have and may never have because they killed him unlike Dylann Roof and others.”