Dr. James L. Moore III has been named as this year’s recipient of the Asa G. Hilliard Model of Excellence Award for his commitment to education research on factors that impact the academic success of African-American students, emphasizing on Black males and giftedness.

Moore will receive the award during the 15th Annual A Dream Deferred Conference occurring from March 13-15 at the Westin Bonaventure in Los Angeles. The conference, sponsored by the College Board, brings together education professionals who strive to make a difference for African-American students, according to a Ohio State University release. 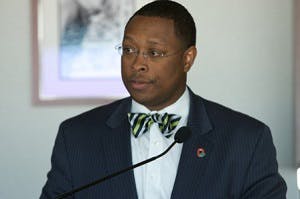 Moore is vice provost for diversity and inclusion and chief diversity officer at OSU. He also serves as executive director of the Todd Anthony Bell National Resource Center on the African American Male and Distinguished Professor of Urban Education in the College of Education and Human Ecology at the university.

“It is truly an honor and privilege for your work to be recognized by others, and it is even more special to receive an award that is named in honor of the late Dr. Asa G. Hilliard,” Moore said.

Previous recipients of the award include Dr. Johnnetta B. Cole, president of the National Council of Negro Women; Dr. Michael L. Lomax, president and CEO of the United Negro College Fund; Dr. Calvin Mackie, founder of STEM NOLA; and Mary Brown, executive director and co-founder of Life Pieces to Masterpieces.