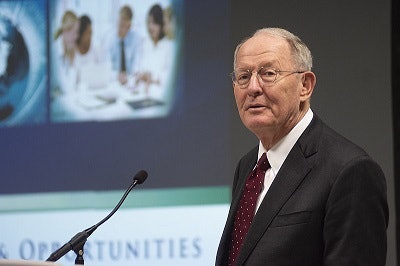 Last week, the U.S. House of Representatives passed the Fostering Undergraduate Talent by Unlocking Resources for Education Act, or FUTURE Act, which would reauthorize $255 million in mandatory annual funds for these institutions for the next two years.

But as the deadline approaches, Sen. Lamar Alexander, chair of the Senate Health, Education, Labor, and Pensions Committee, has asked to attach additional proposals to the legislation, delaying a vote. The Tennessee Republican’s new plan includes simplifying the FAFSA and expanding the students and programs eligible for Pell grants.

Funding minority serving institutions is “something we all want to do,” Alexander said on the Senate floor. “However, instead of a short-term patch we should pass a long-term solution that will provide certainty to college presidents and their students.”

While his proposals individually have bipartisan support, Alexander’s move is controversial. It puts HBCU funding at risk with the hopes of pressuring the Senate into passing extra reforms – reforms that some argue should be a part of comprehensive reauthorization of the Higher Education Act.

Alexander’s plan “fails to address many of the most pressing problems student borrowers currently face and puts HBCUs and MSIs in the midst of an unnecessary political tug-of-war,” said Ashley Harrington, senior policy counsel at the Center for Responsible Lending, in a statement. Harrington called the plan “a piece-meal approach that only makes improvement on the margins” and condemned it for coming “at the expense of low-resourced schools and low-income students.”

On Tuesday, 44 higher education organizations – including the Thurgood Marshall College Fund, the United Negro College Fund and the Hispanic Association of Colleges and Universities – sent an open letter to Senate Majority Leader Mitch McConnell and Senate Minority Leader Chuck Schumer, in support of quickly passing the FUTURE Act. The letter emphasized that if the funding expires, “institutions will be forced to begin ending, or severely altering, the programs and efforts these funds support.”

Sen. Patty Murray, the ranking member of the Senate Committee on Health, Education, Labor and Pensions, also urged the Senate to pass the FUTURE Act instead of “playing politics with valuable and under-resourced institutions.”

“We have a straightforward opportunity to prevent a critical part of our higher education system –HBCUs, tribal colleges, and other minority-serving institutions – from having to deal with a lapse in funding,” Murray said on the Senate floor. “We should take it.”

In a tweet, Sen. Kamala Harris, called the block by Republican leaders “ridiculous,” highlighting the bipartisan origins of the  bill. The FUTURE Act was introduced by North Carolina lawmakers Rep. Alma Adams, a Democrat, and Rep. Mark Walker, a Republican, with a companion bill in the Senate by South Carolina Republican Sen. Tim Scott and Alabama Democrat Sen. Doug Jones.

“There’s no reason to delay this – we must pass it now,” Harris wrote.