Bill Clinton, Activists, and Others Honored at King Day Celebration

WASHINGTON – Former President Bill Clinton on Monday said America’s diversity makes it “the best positioned country in the world for the 21st century.”

Speaking at an event to commemorate Martin Luther King Jr. Day, Clinton said he agrees with studies that prove diverse teams make better decisions than homogeneous groups. And yet, he stressed the value of unity amidst difference.

“America at its best is a country of inclusive tribalism,” he said. “We like diversity, but it only works if our common humanity matters more,” said the former president in a speech at the Martin Luther King Day civil rights breakfast organized by the National Action Network.

The civil rights organization  honored several humanitarian leaders, including Clinton, for their work in promoting equality and for uplifting the disadvantaged in communities across the country. At the event, speakers and honorees said that issues like gun control, accessible education and other equity-promoting measures are even more important at a time like the present when the country has become acutely polarized.

The Rev. Al Sharpton, founder and president of the National Action Network, said that America is “at a crossroads.” On the one hand, there is a push toward civil rights, and on the other, rising divisiveness in a climate of increased anti-Semitism and racist hate crimes, he said.

“We need a spirit of civility and reconciliation. In the middle of all that’s going on, there are those who have shone a light,” he said. 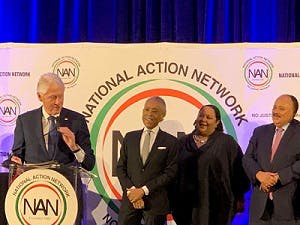 Former President Bill Clinton accepts an award given by Rev. Al Sharpton. Next to Sharpton is AT&T executive Tonya Lombard and Martin Luther King III, the son of the slain civil rights leader.

Clinton and Sharpton highlighted their long relationship as an example of constructive debate, describing their ability to both admire and disagree with each other on points of policy while working toward the same goals – or as Sharpton put it, driving on “different lanes on the same highway going the same way.”

That’s why the National Action Network honored those working toward those common goals.

Clinton was honored with the Lifetime of Excellence in Public Service Award; Urban One chairperson and founder Cathy Hughes was given the Entrepreneur & Pioneer Award; Joan Mulholland, one of the original freedom riders, received the Peace and Freedom Award; MSNBC analyst and MoveOn.org senior advisor Karine Jean-Pierre was given the Visionary Award; Kenneth Rigmaiden, general president at the International Union of Painters and Allied Trades, earned the Labor Leader of the Year Award; and Aalayah Eastmond, a Parkland school shooting survivor, was recognized with the Youth Award.

A recurring theme throughout the event was gun control. Clinton lauded students affected by the February 2018 school shooting in Parkland, Florida, for starting an impassioned national conversation on the issue.

Eastmond moved the audience with a visceral description of her own experience during the horrific school shooting. She said there is an urgent need to extend gun control conversations to beyond mass shootings and to bring discussions on the issue into communities of color.

“The conversation needed to be shared across the country with Black and Brown communities that bear the burden of gun violence daily,” said Eastmond, who is now a first year student at Trinity Washington University. “Gun violence directly impacts youth of color.”

Speakers across the board focused on the importance of student awareness and activism, saying the country’s youth are the inheritors of the legacy of the Civil Rights Movement.

In fact, one of the honorees, Mulholland, was involved in the Student Nonviolent Coordinating Committee (SNCC) in the 1960s.  She said her generation was full of “those bad kids sitting in and causing trouble everywhere, good trouble. … we got rid of legal segregation, but we still have a long way to go.”

Randi Weingarten, president of the American Federation of Teachers, spoke about the importance of public education in challenging times.

“At the end of the day, while public schools are far from perfect, they are the ladder of opportunity, the pathway out of poverty, the place to develop the muscle of civic participation, where we both embrace America’s diversity and forge a common identity,”  said Weingarten.

Hughes pointed to Dr. King’s granddaughter – on stage with her– as a rising media star, and labor leader Rigmaiden described civil rights movement stories as a tool to “reeducate and re-energize the youth and the new activists the movement desperately needs.”

Jean-Pierre, who worked on President Barack Obama’s 2012 reelection campaign, referenced King’s historic “I Have a Dream” speech of August 1963.

“These last few years have been hard, and I think some people have stopped dreaming,” she said. “But we can’t stop dreaming. Nothing is more powerful than a dream believed in.”