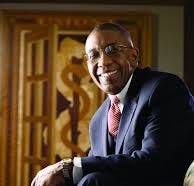 According to the American Association of Medical Colleges (AAMC), the new appointment made him not only the first Black man to lead two medical schools, but the first man in U.S. history to do so.

“I fully understand that, in my presence, I represent the two schools; but I also represent my race,” said Johnson. “In a lot of the places where I work, I am often the only Black person in the room.”

In honor of Black History Month, Johnson is using his platform to address the shortage of Black men in medicine. According to the AAMC, the number of Black, male medical school applicants did not increase for 36 years, spanning from 1978 and 2014.

“It’s a long-term problem for various reasons,” says Johnson. “The shortage of black men in medicine cannot be solved at the medical school level. It has to be addressed in high school and college.”