Dr. Frederick S. Humphries, former president of Florida A&M and Tennessee State universities, passed away last week at the age of 85. During a long and distinguished career of leadership and advocacy for HBCUs, Humphries also served as president and CEO of the National Association for Equal Opportunity in Higher Education. 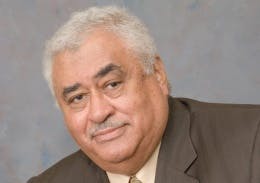 As news of the passing of Humphries spread, many in the HBCU community and beyond offered condolences.

“Dr. Frederick Humphries was my president as an undergraduate student at Florida A&M University and Derek and I are deeply saddened by his passing,” said Atlanta Mayor Keisha Lance Bottoms. Humphries “was larger than life. His leadership made way for scores of students to find their best selves on the highest of seven hills in Tallahassee, Florida. With his ‘Life Gets Better Scholarship,’ he made life better for a generation of Rattlers, exposing countless students to opportunities and possibilities that exceeded the expectations of many,” she added.

In a statement, Dr. Larry Robinson, FAMU’s current president, said that Humphries “committed his life to the advancement of higher education, in particular within the HBCU community, and changed the trajectory of FAMU. ”

Humphries served as chairman of the Board of Directors of what is now known as the Association of Public and Land-grant Universities (APLU). Humphries also served as a member of President Bill Clinton’s White House Advisory Committee on HBCUs, and he was a founder and board member of the Thurgood Marshall College Fund.

Humphries is survived by three children and eight grandchildren. Antoinette McTurner Humphries, his wife of 46 years, passed away in 2006.