AASCU Taps Sias as Director of the Millennium Leadership Initiative 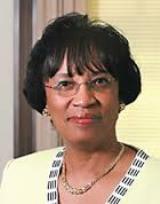 Dr. Mary Evans SiasDr. Mary Evans Sias will take on a new role at the American Association of States Colleges and Universities (AASCU) as director of the Millennium Leadership Initiative (MLI). She will step in as MLI director on June 1, overlapping briefly with current director Dr. Gladys Styles Johnston.

MLI, which was established in 1998, seeks to grow the ranks of minorities and women holding positions as presidents and chancellors at universities and colleges. Since MLI’s inauguration, nearly 500 individuals have passed through the program. Of that number, 85 have attained at least one presidency, and, of those, some have been selected for a second or third presidency. Candidates are nominated and selected on the basis of their prior leadership experience.

Participants, or protégés, convene in Washington, D.C., for three days, where they meet with current presidents and congressional leaders. The goal is to prepare them for the challenges of getting the job and how to excel once they are selected for an upper-level position.

“The program has evolved, and I think Dr. Sias has some good ideas for the future in terms of how we better assess the protégés that are coming in and also following up on the mentorship experience,” said Dr. Muriel Howard, AASCU president.