Nelson Uses Critical Race to go Above and Beyond the Law 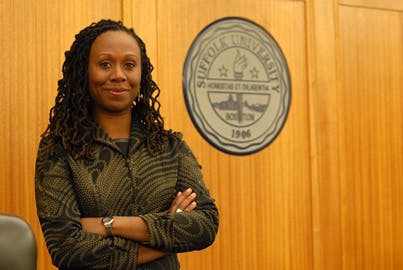 When Camille A. Nelson begins her appointment as dean of the American University Washington College of Law in July, diversity will be a departure point — not an end.

“I like to talk about diversity, inclusion and the third step no one is talking about, which is empowerment,” Nelson said in a recent phone interview from the Netherlands, where she is finishing a sabbatical.

For Nelson, that means not only “bringing more voices to the table and making the implicit explicit,” but also “making sure those people around the table are representative of the community we say we are, making sure we value and treat people in the ways we want to be treated.”

Such are just a few of the principled views of Nelson, a former Suffolk College law dean whose scholarly pursuits are rooted in critical race theory — a theory that holds that racism is endemic to American life and has contributed to contemporary forms of group advantage and disadvantage.

With American Bar Association statistics showing that women represent under a third of all law school deans and African-American women represent just 11 in total — or 19 percent of all female deans — observers say Nelson’s appointment as law dean with a background in critical race theory signifies American University’s commitment not only to demographic diversity but diversity of thought.

“We don’t have a lot of deans,” said former FAMU law school dean and current law professor LeRoy Pernell, who has written about issues that confront law school deans of color, speaking in reference to law deans with a background in critical race theory, or CRT.

“We have a few that have written in that area, but to have a school at this level [appoint a dean with a background in CRT] I think is a sign that America is willing to be much more progressive and much more diverse in their thought,” Purnell said.

Purnell said that, while CRT has been challenged insofar as it has long been considered “out of mainstream,” Nelson’s appointment could embolden new faculty who want to write about critical race theory to do so.

In a memo regarding her selection as dean, American University Provost Scott Bass said Nelson brings “vitality, enthusiasm, and fresh ideas to one of the nation’s most distinctive law schools.”

“She has our full confidence in her ability to lead a dynamic faculty, staff, and student body to the next level of impact in legal education,” the memo states.

Bass said the Washington College of Law is “fortunate to attract such an experienced candidate ready to lead a law school whose very founders were women.

“It is only fitting that she is able to draw upon this rich tradition and institutional legacy,” Bass’ memo states.

Nelson — who has taught law at Saint Louis University, Washington University in St. Louis and the Maurice A. Deane School of Law at Hofstra University, as well as in Canada and France — was born in Jamaica to parents who were also born in the island nation. She was raised on the outskirts of Toronto.

Her father, who moved the family to Toronto after he received a scholarship to go to the University of Toronto, taught classes to children who were then referred to as “juvenile delinquents” at a treatment center in a psychiatric hospital.

Her mother was a secretary at the same hospital.

She served as a clerk for then-Canadian Supreme Court Justice Frank Iacobucci — a moderate judge who in retirement has dealt extensively with issues of police encounters with people in crisis, which is also an interest of Nelson’s.

“While I think that there is considerable overlap now, in terms of our interest and proclivities, I am not sure that was clear back then,” Nelson said when asked of Iacobucci’s influence on her legal views.

“Justice Iacobucci was then regarded as a moderate. He was often seen as a swing vote,” Nelson said. “I cannot say whether that perspective was correct or not. I understand that his work postretirement has been perceived as, perhaps, more liberal.

“What I do know is that, whatever the politics, he is one of the most decent, humane, genuine people I have ever had the pleasure of working with,” she said. “His actions speak volumes.”

After clerking for Iacobucci, Nelson went into private practice.

Nelson says that it was critical race theory that moved her to leave private practice in Toronto and enter graduate school at Columbia University in the City of New York.

Specifically, she said she wanted to study under Columbia’s “powerhouse” of critical race scholars that included Kendall Thomas, Patricia Williams and Kimberle Crenshaw, whom Nelson referred to as “leading lights” of the critical race theory movement.

“One of the big draws to go back to grad school and leave private practice was the possibility of studying at Columbia for my master’s and having the chance to interact and learn from those critical race scholars,” Nelson said.

Nelson began her studies at Columbia in 1998 and obtained a Master of Laws degree from the school in 2000 — a period when she said CRT was focused largely on criminal law with an emphasis on defense.

Over the past decade and a half, Nelson said she has been exploring the “identity dynamics that are just below the surface when we’re talking about law and society.

“I consider myself a legal anthropologist as it were. We’re digging and bringing to the surface things that others don’t know exist or frankly don’t want to deal with. I think that has clearly broad reach not only in criminal law but beyond.”

Nelson says that she plans to pay close attention to the US News & World Report rankings of law schools, although she doesn’t believe the rankings capture the “full excellence of the school.”

In recent years American University has plummeted from 49th in the nation to its current spot of 78th.

Nelson emphasizes that the school’s specialty programs enjoy high ratings. Indeed, US News ranked the law school as No. 2 in clinical training, No. 9 in intellectual property law, No. 5 in international law, No. 8 in trial advocacy and No. 1 in part-time law.

The part-time law ranking is important, Nelson said, because studying law part time can serve as a critical point of access for students who cannot go full time.

She also touted the fact that US News ranks American’s law school highly in terms of diversity — giving it a 0.59 on a scale of 0.0 to 1.0.

“I think it would be helpful if they merged that index because it separates diversity from the core of what we do at law school,” Nelson said.

As a married mother with a son headed off to college this summer, Nelson said she is also cognizant of the need to hold down costs.

“I fully empathize with people in terms of the cost of higher education because many people have to mortgage their education,” Nelson said. “They have to take on so much debt to be able to get what should be far more accessible and fundamental, which is higher education.

“So that is a worry of mine and it’s a struggle because the costs have to be brought under control at some point but we’re already at a state where this is for many people prohibitive, and they’re taking on so much debt and that is worrisome.”