In 2007, Dr. Suzanne Holt was startled — and dismayed — to hear and to read frequent, sexist remarks about then-Sen. Hillary Clinton that never seemed to shadow male presidential candidates. For instance, hecklers at campaign rallies would complain that Clinton was better suited to cook dinner or to iron clothes than to lead the country. Political pundits would, at the slightest hint of cleavage, scold her clothing choices without scrutinizing male candidates who wore open-collar shirts without suit jackets or neckties.

The insults never faded, in Holt’s opinion, while Clinton campaigned that year and during the early months of 2008 before dropping out of a race that eventually saw Barack Obama win the presidency.

So Holt was paying close attention when Clinton, who was secretary of state during Obama’s first term, campaigned again in 2015 and this year to become the nation’s chief executive. The gender-based rhetoric resumed — and grew nastier. 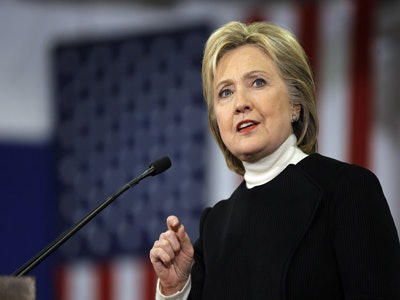 This spring semester, Holt is teaching a new course at Kent State University, where she is director of women’s studies and a professor in the Center for the Study of Gender and Sexuality. The course is titled, “Hillary Clinton Case Study: Perspectives on Gender and Power.” Rather than biographical or documentary, the course examines cultural perceptions — and misperceptions—about all women by using Clinton’s campaign and career as vehicles.

“This has been burrowing in my subconscious for years,” Holt says of the Clinton course. “I have also been thinking about how I would feel if the vulgar comments against Hillary Clinton were made about my mom, my sister or my aunt. Our minds are more primitive than we want to own. As a society, we’re not that comfortable with women in power. It is as if Clinton failed to match our expectations of what women should be. Regardless of whether you are pleased by the election outcome, we lived through trauma that shows how we feel about each other.”

Clinton’s four-decade career in law and politics has resulted in Americans voting her as the most-admired woman in the world 20 times since 1993, according to Gallup polls. However, the bruising 2016 presidential campaign is the starting point for Holt’s academic course, because of the sexist and misogynist rhetoric aimed at Clinton, which Holt says shows that even accomplished and powerful women still struggle against preset notions of who they’re supposed to be.

“The course speaks to the heart and soul of women’s studies as a field,” Holt says. “If we as a discipline have nothing to say, it’s a mirror of our ineffectiveness.”

Dr. Molly Merryman, director of Kent State’s Center for the Study of Gender and Sexuality, was delighted when Holt asked her during the summer, when it became official that Clinton was the Democratic nominee for president, if the academic course could be added for the spring rather than settling for a later classroom date.

“Although Clinton’s candidacy was historic as the first female, presidential nominee of a major political party, this isn’t a course for just Hillary Clinton fans,” Merryman says. “It’s nonpartisan, and Republicans are welcome to enroll, too.”

She adds, “From time to time, there are social situations that arise where we don’t fully understand what’s happening to women. Without the discourse that women’s studies provides us, we’re left with no answers because at face value, it doesn’t make sense until you look at it through that lens.”

Holt has contacted Dr. Matthew Akers, a University of Akron director of government relations, who’s teaching a “Trump Triumphs” course this spring that focuses on the new president’s rise to victory and how he gained wide support. Holt and Akers are discussing how they might share resources in mutually relevant areas and potentially collaborate during the spring as the semester and their respective courses unfold.

During the final days of the campaign, Clinton appeared at a rally on the Kent State campus. Because local media covered the event, Kent State officials issued a press release announcing Holt’s case study course for the spring. Right after Trump’s Election Day victory, the Kent State release went viral, appearing in dozens of newspapers and TV news broadcasts nationally. This fueled hundreds of Americans to email Holt and Merryman, who were quick to dispel false impressions that “the course would be some sort of sour grapes” because of the election results, Holt says.

But because many of the letter writers became interested in Holt’s intentions, they asked if they could somehow electronically access the course. As of now, Holt hopes to offer some sort of webcast of a class session or two later in the spring for people who aren’t Kent State students. She also is exploring the possibility of other faculty contributing to a blog or other digital platform that supplements course material and would perhaps be open for public consumption.

Holt adds that Clinton’s loss in the election, interestingly, seems to give her course even more gravitas.

“This changed everything,” she says of Trump’s victory. “If Clinton had won, we, as a society, would probably have pretended that none of the sexism had ever happened. So, yes, the fact that Clinton lost does matter.”