Current Deans: Homework Key to Applying for This Job

SAN FRANCISCO — When Camille Nelson applied for Suffolk College’s law dean opening, she knew that her lack of fundraising experience — she had held only faculty roles at that point — could hinder her prospects.

So Nelson sought out development officers in order to learn more about what goes into successful fundraising, the jargon and exactly what a dean is expected to do and not do. Nelson prepared to talk about all this, too, during job interviews. 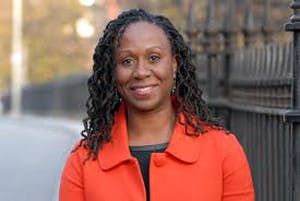 “These were really strong internal candidates,” she said. “They were invaluable in helping me make the transition to each new school. I felt it important to see what I could do to support each of them.”

Nelson’s remarks came during the annual meeting of the Association of American Law Schools, which concluded last weekend.

Now American University’s law dean, Nelson participated in a panel discussion titled, “So You Want To Be A Dean?” She and seven of her peers from around the country spoke about their job-hunting experiences, academic positions held prior to becoming deans and how candidates can boost their chances. The panel was diverse; three deans including Nelson are Black.

Several panelists became deans rather than stick to teaching because they wanted to contribute beyond what they were already doing. However, dean applicants shouldn’t feel wowed by the advertised salaries.

Eric Gouvin, for instance, said that he reaped more income as a Western New England University law professor juggling a part-time consulting practice and directing its center providing legal help to small business owners than he does now as its dean. Considering the time demands on a dean, a faculty member works far fewer hours and therefore earns more proportionally, Gouvin and others said.

Danielle Conway said that one of her biggest surprises since becoming the University of Maine’s law dean two years ago “is how much of my salary I have to give away” to charitable causes on- and off-campus to cultivate institutional relationships. Other panelists echoed her sentiment.

The deans said that like it or not, interviewers often tiptoe around the subject of diversity with buzz words like “proper fit.”

Jane Korn is not only the first female law dean at Gonzaga University, but the first Jew to hold the post. Gonzaga is a Roman Catholic, specifically Jesuit, institution.

“Many years ago, this might not have been a proper fit for Gonzaga and perhaps not for me either,” Korn said. “But it’s important to keep an open mind when job-hunting.”

She said that during the early stage of a previous job search, she lost interest in the institution with the vacancy but attended the interview anyway, and asked interviewers many questions about their priorities and pet peeves in order to help sharpen her approach in subsequent applications elsewhere.

The panelists agreed that cover letters are important in the application process but too often, prospective deans seem to spend too little time and effort on them.

To drive home this point along with many others, the eight deans performed a 30-minute skit to start the conference session. The skit was a behind-closed-doors meeting of a fictitious search committee during which they sifted through and complained about dean applicants, prompting frequent laughs from the audience. Each dean role-played a committee member, such as tenured law professor, university trustee, law student and so on. At one point, the actors felt compelled to interrupt themselves to remind the audience that the CVs and bios of the unseen applicants were fictitious—although based on real people—and that their deliberations were only for illustration.

The committee members blasted a job candidate whose cover letter was only two paragraphs and merely referenced his 54-page CV listing his scholarly articles published. Worse, the letter didn’t address any of the priorities mentioned in the job description for a new dean. The committee members lampooned another applicant’s embarrassing typo in his cover letter, questioning whether he would bother paying attention to details if hired.

After the skit, Ben Barros recounted how he spent almost an entire day drafting a different cover letter each time he entered an applicant pool across eight law schools. It was important to tailor each letter to that particular law school’s mission, needs, strengths and weaknesses. Each time, Barros tried to specify why he was a suitable candidate for that institution and why he wanted the job.

“It wasn’t surprising that the University of Toledo was my final application,” he said, referring to his year-long job search and the law school that hired him. “My cover letters got better as the year went on, and I learned a lot going through each (law school) search process.”

Barros and other panelists offered conference-goers additional thoughts and suggestions:

“One thing we don’t do well in the legal academy is prepare people to become deans,” Barros said. “So if you are interested, try to tell your dean in order to get the process started.”