As the world celebrates International Women’s Day, a new report finds that only half of women worldwide participate in the workforce, compared to more than three-quarters of men. This disparity exists even though the majority of men and women say that it is acceptable for women to have a paid job outside the home according to a new, sweeping study on women and the workforce conducted jointly by the International Labour Organization (ILO) and Gallup. 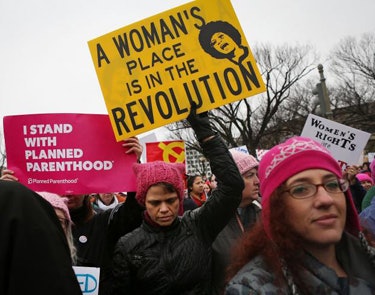 In Northern Africa, for instance, 67 percent of women said that they wanted to hold a paying job, but only 23 percent of women are employed. In addition, 51 percent of men want women to stay at home — the highest proportion of men who hold this view in the world. Troublingly, younger men in Northern Africa were more likely to say it was unacceptable for women to hold a paying job, suggesting that attitudes toward female participation in the workforce were regressing in that particular region.

Women who do work are generally expected to balance employment with caring for their families, an added responsibility that men do not face. This dichotomy is not lost on anyone — men and women worldwide list balancing family and work as the top challenge with which working women must contend.

“What all women in the workforce have in common is that more of them want to have both: to take care of family obligations and work,” Neli Esipova, director of research for global migration and regional director for Gallup’s World Poll, said at a panel at the Gallup offices in Washington, D.C. on Wednesday.

Despite broader global support for female participation in the workforce, the majority of people still hold traditional views of gender roles, to the point that researchers working on the study reframed some of their questions around those assumptions. When researchers started out in their initial round of field testing, ILO senior gender specialist Susan Maybud said they asked men and women the same question: would they prefer to stay at home and care for their families, or work to support their families financially?

Cultural norms and expectations are passed on from generation to generation, he explained. “If you’re going to oppress people, you have to enlist them in their own oppression, and you see a lot of that around the world,” he said.

So, if cultural norms require women to stay at home and take care of the family, it may take decades for that sort of thinking to change.

Deaton pointed to further research, which suggests that the lot of women may be improving globally, in ways other than workforce participation. Global fertility rates have declined over the past 50 years. Today, there are only seven countries where women give birth to six children on average over the course of their lifetime — compared to the 100 countries where this was the case, just 40 years ago.

“That means that women are no longer spending all of their lives in this reproductive cycle, which is also incredibly risky — risky to their own health, and risky to their children’s health,” Deaton said.