Elizabeth A. Kronk Warner recently made history when she became the ­first woman and ­first Native American selected as dean of the S.J. Quinney College of Law at The University of Utah.

Still, she readily admits that she wrestles with imposter syndrome.

“Every time I advance to a new position, I worry that I am not good enough or that people will see through me,” says Kronk Warner, who took the helm of the 106-year-old law school in July. “I was scared to take over as dean of the S.J. Quinney College of Law given I held it in such high esteem and feared that I would not be good enough.” 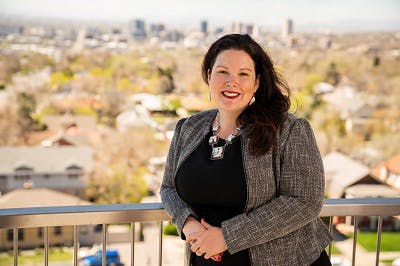 That kind of blunt but honest talk has proven to be reassuring for many of the 300 or so law school students at Quinney — particularly those who hail from underrepresented backgrounds — who struggle with similar feelings, wondering if they have what it takes to make it in the legal profession.

In her short time on the job, Kronk Warner has already created a culture of openness and has made diversity — in recruitment and retention — a major priority of her administration. She wants her students to know that she too is like many of them and has used her bully pulpit to focus on building a culture of collaboration where students and faculty lean on each other, while also paying close attention to their mental health, wellness and mindfulness.

“Law school does not have to be cutthroat,” she says, matter-of-factly. “It’s important to take time to learn how to focus and learn how to be a bit happier.”

A national expert in environmental and tribal law, Kronk Warner has emerged as a mighty force in legal education. Prior to her appointment at the University of Utah, she served as associate dean of academic a airs, professor and director of the Tribal Law and Government Center at the University of Kansas School of Law. As associate dean, Warner oversaw operations, admissions, career services and several degree and certi­ cate programs.

“It was obvious from the moment she joined the KU Law faculty that Elizabeth had incredible leadership skills,” says Stephen Mazza, dean of the KU School of Law, adding that Kronk Warner used those skills to advance the Tribal Law and Government Center, take on the role of associate dean and ­fill in as acting dean three summers ago. “It was only a matter of time before another organization recognized her skills. The University of Utah is truly fortunate to have recruited her as their new dean.”

Pathway to the deanship

A member of the Sault Tribe of Chippewa Indians, Kronk Warner grew up in Michigan’s Upper Peninsula. Her parents were both educators who instilled in her the importance of education. In fact, her mother went back to law school to begin a second career and eventually became a tribal judge.

“Her experience definitely had a positive impact on me in terms of watching her progress and watching her play a key role in the tribes,” says Kronk Warner.

After attending Cornell University as an undergraduate, Kronk Warner headed to the University of Michigan Law School, where she was a contributing editor of the Michigan Law Review and an active member of the Native American Law Student Association.

After working as an associate at two Washington, D.C.- based law firms, where she represented Native American federal employees, she applied for a faculty position at the University of Montana School of Law on a whim, almost certain that she would not get the job.

She was hired and spent four years on the faculty before transitioning to Texas Tech Law School. In between, she served as an appellate judge for the Chippewa Indians Court of Appeals.

“Sadly, I am not as connected as I would like to be,” she says of the reservation that she will always call home. “But, my reservation remains my favorite place to go and relax. It is a place to reconnect and refresh.”

Kronk Warner’s unique background and her work experience is a welcomed addition to Quinney, says Chase Wilde, who will graduate in the spring and begin work at Kirton McConkie, Utah’s largest law firm.

Kronk Warner’s appointment as the first woman and Native American dean of the Quinney law school “makes me extremely proud to be a student here,” says Wilde. “I believe that a diverse student and faculty body enriches the learning environment for everyone involved. That is why Dean Kronk Warner’s goal of recruiting and retaining underrepresented students is so important. The fact that Dean Kronk Warner — a Native American woman — is at the helm of our institution shows that the S.J. Quinney College of Law is truly an atmosphere of inclusivity for all.”

Reaching out to diverse populations

Kronk Warner has already stepped up her efforts to ensure that diversity remains a top priority of the law school. Still, she knows that moving the needle will not happen overnight. There is a widespread perception that Utah lacks racial diversity, though the demographics across the state have been rapidly shifting over the past decade. 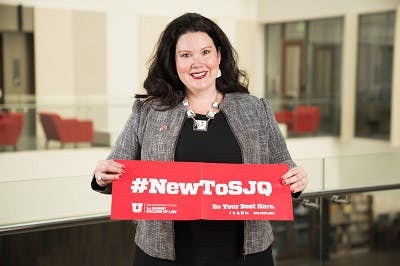 “All of our recent hires have been diverse in some way, and I am proud that our senior administrative staff is all diverse in some way,” she says. “We are also working on the diversity of our student body by applying for grant funding to help develop programs to attract and retain diverse students.”

She says that all first-year students participate in diversity, equity and inclusion training as part of their required orientation and she hosts a monthly student forum to talk with students about any diversity-related concerns they may have. Additionally, she has created an internal committee of faculty and staff to work on how to make the Quinney law school a more inclusive workplace. The committee works in conjunction with the Alumni Diversity Council, which includes key stakeholders from the community.

“We have a combination of world-class faculty who are literally the experts in their fields and who are the experts in the nation, if not the world, doing phenomenal work,” she says, “balanced with amazing students who are really engaged and doing great things in the community, and a staff who are supporting us and really helping to make us the premier law school of the West.” That’s her selling point to all prospective students as the school’s chief ambassador.

“It’s the cusp of so many initiatives,” she says. “We are minutes away from the courts, the state capitol and access to policy makers, courts and judges.” For the future, Kronk Warner envisions partnerships and collaborations between the law school and other branches of the university, such as the College of Education and the College of Engineering.

That kind of innovative thinking is important and there’s no one better to carry that mantle forward than Kronk Warner, says RonNell Andersen Jones, associate dean of faculty and research at the law school.

“A law school, of all places, should be a place where justice is explored through many different lenses and as many different lived experiences as possible,” says Jones. “Having a dean who is committed to those principles is changing the tone and spirit of our school for the better.”

Kronk Warner recognizes the historic symbolism that comes with her becoming the first woman and the first Native American to lead the law school. The impact is even greater given the dearth of women and other Native Americans in leadership positions in legal education across the nation.

“It is something that I take very seriously,” she says. “I want to live up to this tremendous honor I have been given. Representation matters and I am proud to be the first Native woman serving as dean of the S.J. Quinney College of Law.”