After a Texas law banning abortions after six weeks of pregnancy went into effect on Wednesday, a new poll by PerryUndem has found that 66% of college-educated workers say they would not take a job in a state with such a law in place, reports Forbes. As a result, some speculate that Texas could lose out on skilled workers as a result of the highly-restrictive law.

The poll, which was conducted between August 13 and August 26, surveyed a national sample of 1,804 adults between the ages of 18 and 64 who have a college degree and are either working full time or looking for full-time work. The poll found that roughly 75% of women and 58% of men said the new law would discourage them from working in Texas and that 73% of women and 53% of men said they wouldn't even apply for a job in a state that passed a similar ban. Additionally, 80% of respondents said they do not want the landmark ruling Roe v. Wade overturned and that they consider abortion to be an "important" part of women's rights and gender equity.

With 85% of abortions taking place after the six-week mark — a point at which most women do not realize they're pregnant — the Texas law is what many are calling a near-total ban on abortions. It makes no exception for rape or incest and has an unusual feature allowing private citizens to sue those who perform, aid or abet an abortion. 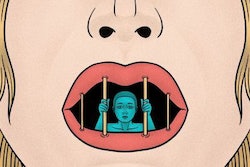