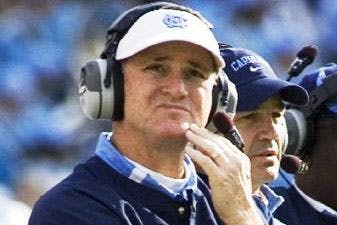 CHAPEL HILL N.C. – A two-year scandal at the University of North Carolina at Chapel Hill that has led to sidelined football players, NCAA penalties and the departure of a big-name coach has slowly built into questions of how widely academic fraud has spread at the elite public university.

After a series of campus reports into what went wrong, the oversight board for the 17-campus state university system is examining whether athletes were guided into no-show classes and lightly supervised independent studies. State criminal investigators are looking into signs of possible forgery, conspiracy, fraud, and whether a professor was paid for summer courses he didn’t fully teach. A former governor is looking for signs corners were cut beyond the one academic department identified so far.

Harvard University is coping with its own cheating scandal, and universities nationwide for decades boosted sports with academic compromises. But UNC-Chapel Hill will continue to thrive despite the current black eye, said Jay Smith, a history professor and member of an informal group of faculty members critical of the role of athletics on campus.

“Our academic programs are as strong today as they were in 2010, but our reputation for truth-telling has taken a real hit. I think the administration needs to dedicate itself to restoring that reputation,” Smith said.

The story began with the NCAA investigating players under since-fired football coach Butch Davis having contact with agents and receiving jewelry and other gifts. The NCAA in March imposed a one-year ban from postseason play, 15 forfeited scholarships and other penalties on the football team. But the probe also found academic fraud including a tutor who worked on football players’ term papers.

The saga’s next development could come Thursday, when former Tar Heels player Michael McAdoo’s lawsuit against the school, Chancellor Holden Thorp and the NCAA is heard in the state Court of Appeals. McAdoo is seeking damages after being ruled ineligible to play football for academic misconduct. The tutor helped McAdoo assemble a class essay, parts of which were showed to be plagiarized after his school work was submitted with the lawsuit. McAdoo is recovering from what may be his second season-ending injury since joining the NFL’s Baltimore Ravens two years ago.

McAdoo’s work in the Department of African and Afro-American Studies was among the pointers that led to an internal probe of the department. It found that more than 50 courses in African studies going back five years—about 9 percent of all courses in that time—featured instructors who didn’t teach, grades that were changed, and faculty signatures faked on grade rolls.

That investigation found no evidence of student-athletes receiving favorable treatment. But athletes represented about six out of 10 students enrolled in those suspect classes, and football players made up more than a third of the enrollments. One suspect African studies class from summer 2011 had 18 football players and one former player enrolled.

Suspicions the academic irregularities were going on before 2007 were boosted after the UNC grade record of former Tar Heels football star and NFL All-Pro Julius Peppers was mysteriously posted online. Peppers’ transcript showed he failed or barely passed several courses, but might have remained eligible to play because of 10 classes in which he earned a B grade. Nine of the courses were in African studies.

After that revelation, the university called on former Davidson College chemistry professor and North Carolina Gov. Jim Martin to look for signs of cheating in other departments as far back as he needed to check.

“We will look as far as we can go to try to find similar kinds of, or even more creative, misconduct, if any. We’ll follow the evidence wherever it goes,” said Martin, who is teaming with outside consultants who specialize in academic performance audits. “We’re not looking for courses that are just a little easier than others. … What we’re looking for is something that’s more fraudulent.”

Martin aims to report findings sometime next month, but he’ll decide then if he’s uncovered enough to keep digging. The Republican who headed the state from 1985 to 1993 started interviewing professors and others about whether to look for suspicious signs late last month.

The university did not provide a copy of its contract with the consultants working with Martin.

Cheating to win in college is hardly new.

Harvard University said last month it was investigating dozens of students in what it called “the most widespread cheating scandal” in its nearly 400-year history. Dozens of Duke University MBA students collaborated on a take-home exam in 2007. Twenty-five football players were among the 61 athletes in a Florida State University cheating scandal in 2006-07 that included university staffers giving athletes answers to an exam and typing papers for them.

Smith, the history professor, said the scandal is forcing UNC to cope with big-money athletics, a system that carries with it “corrupting” compromises to help the performers stay eligible and keep delivering wins.

“All big-time sports universities have lived with the creation of a kind of shadow curriculum that allows the NCAA to say with a straight face that it is an educational organization and an organization that promotes education, but which in fact often degrades the education experience of the athletes who follow that shadow curriculum,” he said. “It’s just a dirty system.”

In another attempt at reform, Thorp is asking former Cornell University president Hunter Rawlings to examine the future relationship between academics and athletics on campus.

UNC athletics director Bubba Cunningham, hired last fall ahead of the NCAA football sanctions, said the school is responsible for giving athletes an enviable education and teaching them life lessons from competition. But athletics excellence also breathes inspiration into campus life and keeps hundreds of thousands of alumni connected to Chapel Hill.

Cunningham said he refutes suggestions that a university that last year attracted $767 million in research funds would set up a system twisting the school’s primary purpose. The athletic department generated $72 million last year, less than a tenth of the research haul.

“I think if there’s a shadow curriculum, that statement basically is saying that there is a lack of integrity at every major university in the country that there are systems designed solely for kids that participate in athletics,” Cunningham said. “I find that amazing that one of the largest research universities in the country would do that.”