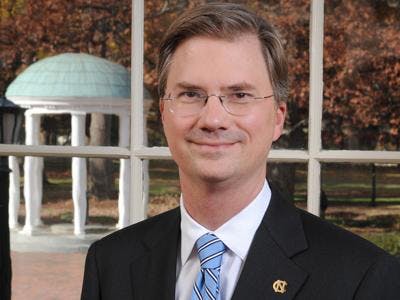 CHAPEL HILL, N.C. — The chancellor who has led the country’s oldest public university for four years will step down next year in the wake of scandals involving academic fraud, improper travel spending by fundraisers and special treatment for athletes.

University of North Carolina at Chapel Hill Chancellor Holden Thorp will step down in June after the academic year and return to teaching in the chemistry department, where he had been a longtime professor and former chairman, the school said Monday.

Thorp said in an interview Monday that he decided to resign on Sunday, stressing that it was his choice and that he wasn’t pressured by the board.

“They were supportive of me and appreciative of how hard everything’s been. But over the weekend I’ve had a chance to reflect on kind of where we are,” Thorp said.

In the latest black eye for the university in a two-year series of scandals, the mother of former Tar Heels basketball star Tyler Hansbrough and top university fundraiser Matt Kupec resigned their development jobs last week under suspicion of improper travel spending. An internal audit Thorp launched is checking whether the pair used money from donors to travel to cities where Tami Hansbrough’s younger son Ben was playing basketball for Notre Dame.

“I’ve had a lot of things that have happened over the past two years that have been difficult, things that Carolina’s never really faced before,” Thorp said. “A lot of them came from policies that we’ve had in place for a long time that weren’t really adequate to catch things that needed to be caught. I also trusted some people who didn’t do things the right way. And I think that whenever I found out about these things I took action, put reforms in place and made sure that the things that happened make this a better university.”

Thorp’s resignation comes on the heels of troubles for other higher education leaders across the nation.

The most prominent case came in June when University of Virginia President Teresa Sullivan was pushed out by her board, which felt she hadn’t taken dramatic enough action to position UVA for changes such as online learning. Sullivan was reinstated two weeks later after a backlash by faculty, alumni and students.

The UNC saga began in 2010, with the NCAA investigating football players under since-fired coach Butch Davis having contact with agents and receiving jewelry and other gifts. The NCAA in March imposed a one-year ban from postseason play, 15 forfeited scholarships and other penalties on the football team. But the probe also found academic fraud including a tutor who worked on football players’ term papers.

Further digging revealed that between 2007 and 2011, more than 50 courses in the university’s Department of African and Afro-American Studies — about 9 percent of all courses in that time — featured instructors who didn’t teach, grades that were changed, and faculty signatures faked on grade rolls. Many of the students taking no-show or lightly monitored independent studies courses offered by the department were football players.

The Board of Governors expects to hear next month from former North Carolina Gov. Jim Martin, who is joined by an outside consulting firm in exploring whether other departments allowed students to cheat and when the problems began.

The State Bureau of Investigation is looking into whether fraud or other crimes were committed.

Thorp’s announced departure means he can devote his attention over the next nine months to making sure the problems identified are corrected and that the reforms introduced are adequate to prevent a repeat, UNC System President Tom Ross said. Thorp’s tenure has brought positive campus developments in teaching, research, and public service, Board of Governors Chairman Peter Hans said.

Some members of the campus Board of Trustees tried to talk Thorp out of this decision, trustees chairman Wade Hargrove said.

Thorp, 48, is a Fayetteville native who earned his undergraduate degree at UNC-Chapel Hill and a doctorate in chemistry from the California Institute of Technology.