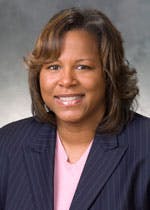 University of Notre Dame assistant head women’s basketball coach Carol Owens has been named president of the Black Coaches and Administrators board.

University of Notre Dame assistant head women’s basketball coach Carol Owens has been named president of the Black Coaches and Administrators (BCA) 11-person board. Owens has been on the BCA board since 2007 and has served on several committees, including serving as the 2009 convention program committee chair.

“Carol has been an active and enthusiastic board member. I look forward to working closely with Coach Owens during the upcoming months. Her knowledge of the sports landscape and her leadership qualities will be a great asset in the continuing development of our organization,” BCA executive director Floyd A. Keith said in a statement.

As a coach at Notre Dame, Owens has helped lead the Fighting Irish to three Final Fours and won the 2001 national championship. She served on the Women’s Basketball Coaching Association board of directors as the executive committee secretary from 2008 until she stepped down in 2011 to join the BCA board.

“I’m thrilled and honored to take on the role of president of the BCA,” Owens said in a statement. “I’ve thoroughly enjoyed my time on the BCA Board and now look forward to taking an even larger role in helping to grow existing areas of development and discover new avenues of growth for all minorities in sports. This is an exciting time to be part of the BCA, and I look forward to joining with the BCA membership and Board to help take our organization to new heights in the future.”

The Black Coaches and Administrators group is a 501(c)(3) tax-exempt nonprofit organization whose primary purpose is to foster the growth and development of ethnic minorities at all levels of sports both nationally and internationally. BCA members work to create an enlightened environment in K-12, college and professional sports where issues can be examined closely, debated sincerely and resolved honestly. The BCA’s focus involves the concerns of its colleagues in professional sports, NCAA (Division I, II, and III), NAIA (Division I and II), junior college and high school levels.