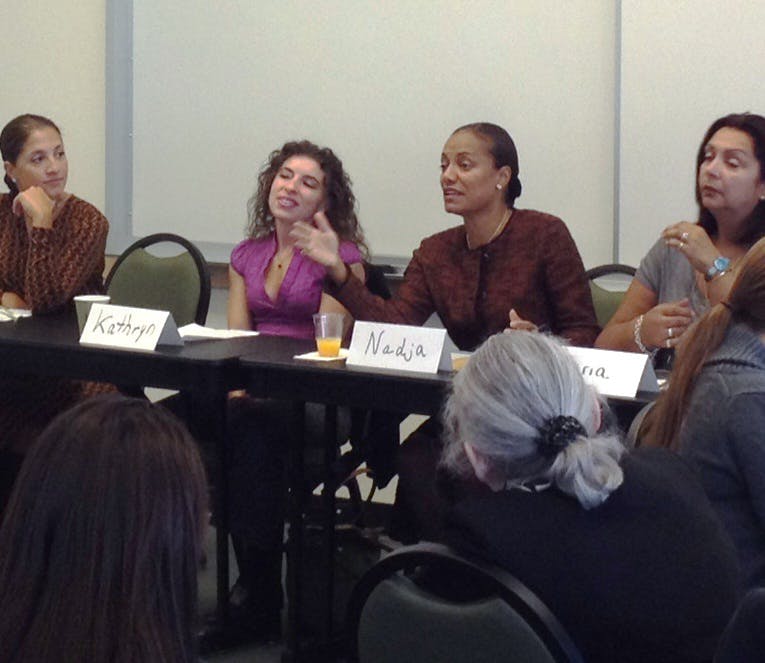 Baruch College at the City University of New York may be a business school, but its Departments of Modern Languages and Comparative Literature and Black and Hispanic studies are working hard to ensure students are receiving an education in humanities with a robust calendar of events for Hispanic Heritage Month.

“You go to business school but then you go into the world, and you need that humanities part,” said Hedwig Feit, an adjunct lecturer in the Black and Hispanic studies department, at a panel discussion with Latina entrepreneurs on Monday morning.

“Some families that have gotten to this country don’t themselves have the pride to pass their heritage to their children, so it is our duty to them to do it. After we take care of our Latino population, then [we’ll] spread knowledge about our culture to the rest of the community. I find that the lack of information is just too great,” said Feit, a longtime friend of the school who started an endowment for interdisciplinary seminars in the 1980s, created the Paul André Feit Memorial Fund that deals with Latin American issues in honor of her son, and recently launched the Valentín Lizana y Parragué Chair of Latin American Studies — the first of its kind — in her grandfather’s name. From speakers in politics, sociology, business and many other fields, this month’s events will draw in all sorts of experts to highlight a variety of Latin-American and U.S. Latino issues and empower students to succeed.

“I learned that not only as a Latina, but as a woman, you can be really successful in business if you really go for your dreams,” said Mayra Horta, a third-year student at the college. “There are going to be a lot of obstacles and it’s going to be a bit harsh at times, but in the end it’s going to be worth it.”

Nadja Fidelia the managing director of Eland Capital at the Williams Capital Group, L.P. in Manhattan, spoke on the panel of four and shared how important her language skills have been in her career. Even before graduating from Baruch with a bachelor’s in political science, Fidelia was a trader on the desk at Lehman Brothers because she spoke fluent French and Spanish and was able to work with international clients. “[I] think it’s about giving back. Everything is about giving back and sharing because then our lives and everything we learn is worthwhile,” said Fidelia, who has served on the board at Baruch and frequently attends CEO roundtables at the school.

“I love the school. I love what it represents. I love that it is affordable — that it was affordable for me because this was my only option,” she said. “It’s affordable, but it has a huge impact: A lot of executives throughout corporate America graduated from Baruch College.” Sophia Brivio, an executive chef and Founder of the site The Well Seasoned Chef, and Kathryn Martell, a 2011 MBA graduate, also spoke on bi-culturalism, assimilation and the advantages of being bilingual.

Horta said hosting such an event during class hours was key in her participation. “Because I have to work too — I’m a full-time working student — I don’t have the time to come in. But since it was during class time, I came,” said the 22-year-old Argentine-American. Indeed, it’s an issue faculty and staff are ever conscious of, said Feit. “This is a commuter college so it’s always very difficult to get the students to attend activities like this,” she noted. “The other problem we have is most of our students go to school and go to work so their time is very limited. So we have to find out their schedule and plan according to their schedule — we’re not really following ours.”

As long as events are planned with students’ schedules in mind, said Feit, they are effective. “The lack of information about our community is so large that it is for us a duty to spread our heritage. And I think the students have to also become more aware — I’m talking about the Latino students that we have — of their own culture because some of them have not had the support at home to give them that pride.”