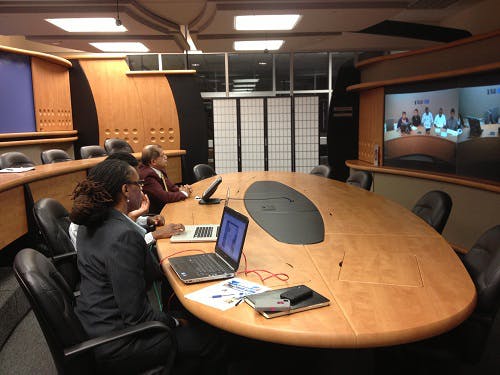 DURHAM, N.C. — With the recent explosion of social media, it’s no surprise that many of the biggest issues of the 2012 presidential campaign have been raised and examined through that medium. This has been especially true of the presidential debates, when, within seconds, phrases like #FireBigBird, #BindersOfWomen and #HorsesAndBayonets instantly became household phrases and dominated news cycles.

Like millions of others, North Carolina Central University’s Stefan Weathers has been paying very close attention to the debates between President Barack Obama and former Massachusetts Governor Mitt Romney. The Charlotte, N.C., native said he has definitely noticed a significant amount of political discussion in his own online social network.

“My Twitter timeline has been flooded with people tweeting about the issues,” he said. “You will see #Debate2012 tweets and things like that.”

Noticing the trend, Weathers decided not only to be a spectator in the discussion, but he also decided to drive it. He organized a group of students and faculty members from five Historically Black Colleges and Universities in North Carolina to participate in a pre-debate discussion prior to the third and final debate of the 2012 presidential election season.

NCCU spokeswoman Ayana Hernandez said the goal of connecting with other HBCUs in the area was to help give a more well-rounded political thought process to the students involved.

“We thought about our students, how they could engage in a dialogue not only on this campus, but virtually with their peers at other HBCUs on such an important issue,” she said.

Weathers served as a student moderator for the event, which came together quickly after administrators and students at NCCU felt compelled to connect with students and faculty at other HBCUs in the important battleground state. Hernandez said that, once the idea was floated around, Weathers was instrumental in helping put the event together in such a short window of time.

“This whole idea was erected after the first debate,” Weathers said. “The planning process behind it went pretty fast because we were gearing up for the third debate.”

During the hour-long teleconference, students questioned faculty members as well as each other on foreign policy issues such as the murder of Libyan Ambassador Chris Stevens, the prospects of a nuclear Iran and how to deal with the emerging Chinese economy.

Dr. Rolin Mainudein was one of the faculty members on hand for the discussion. The associate professor has been at NCCU for nearly 17 years and found many positive takeaways from the evening’s events.

“It is very important to have students involved because they are citizens and they are going to be voting. It’s important to help them and see how they process information,” he said. “I think it will also energize them by seeing fellow students on other campuses. They aren’t just hearing from us faculty members, but also fellow students. That’s going to help them think about foreign policy or whatever the topic is we’re discussing.”

Mainudein said that he always tries to encourage his students to interact with him instead of simply lecturing them. He said the intercollegiate debate was an excellent example of students doing just that.

Weathers shared his professor’s excitement. He seemed encouraged by the fact that many of his peers came prepared with serious questions and a working knowledge of the subject at hand.

This will be the 20-year-old’s first time casting a ballot in a presidential election. As for the social media aspect of the discussion, Weathers said it plays a huge role in shaping the political thoughts and opinions of younger voters like himself.

“This is a different generation. This technology is what we know; it’s what we’ve grown up with,” he said. “Social media connect people from all walks of life. Tonight we connected with people from other HBCUs.”