NASHVILLE, Tenn. — The Tennessee Board of Regents voted unanimously Tuesday to approve Glenda Baskin Glover’s appointment as the next president of Tennessee State University. She will assume the position January 2, after the contract for interim president Portia Shields expires.

Glover was most recently the dean of the College of Business at Jackson State University in Jackson, Miss. A licensed attorney and certified public accountant, she earned a bachelor’s degree in mathematics from Tennessee State, an MBA from Clark Atlanta University, a J.D. from Georgetown University Law Center and a Ph.D. in business economics and policy from George Washington University.

“I am truly honored and excited about returning to my alma mater, Tennessee State University, in this monumental leadership role,” Glover said in a statement. “It is indeed a privilege to be selected as president of such a historic institution that has enriched the lives of so many students, and empowered thousands of families and communities, and still continues to do so today.”

Following a nationwide search that began last May, Chancellor John Morgan said he will recommend Glover to the board at a special telephone meeting on Nov. 27, where approval is expected. Board of Regents director of communications Monica Greppin said in the past, all chancellor recommendations for campus presidents have been approved by the board.

Glover will replace Dr. Portia Shields, who served as interim president for the past two years. “Dr. Glover’s outstanding credentials and leadership skills are impressive,” said Morgan in the announcement. “Her experience as a faculty member, campus administrator and an engaged member of the civic and business communities will serve TSU and the entire region well.”

At Jackson State, where Glover has served as business college dean for 18 years, President Carolyn Myers praised her work. “Dr. Glover has been an invaluable asset to Jackson State University, not only exemplifying excellence in her field, but inspiring that same excellence in our students, faculty and staff,” Meyers said. “Tennessee State University will be fortunate to have her at its helm.”

Tennessee State has experienced governance and fiscal difficulties under its recent leaders, punctuated by a bitter dispute and the arrest of the faculty senate president during an August meeting.

During a video-recorded presentation to the campus community, Glover pledged to initiate a capital campaign to raise funds and to work on building morale and improving academics. “Almost any problem can be resolved through communication,” Glover told the group. “I will collect data, talk to individuals … and call the parties together.”

She also said, “I can promise you this: that I will work hard every day to make sure we have a university that is reputable, that is professional and meets the needs of our students.”

With a current enrollment of 8,775, Tennessee State is the only land-grant institution in the Tennessee Board of Regents system and the only historically Black university in the system. 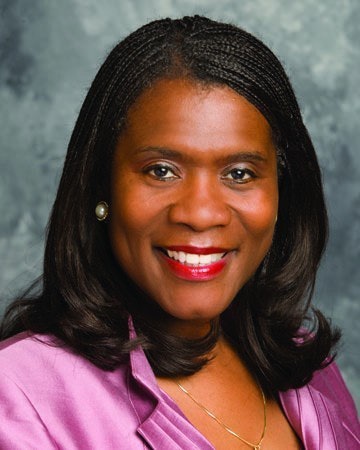