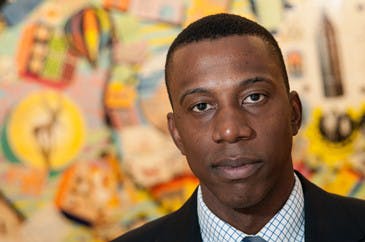 After watching several documentaries on national geography, Dr. Rodney Priestley was certain he would pursue a career in marine biology, or perhaps, become a geologist, exploring the behaviors of volcanic disruption. Instead, Priestley chose a different view of natural life — a microscopic view.

Once he enrolled in one of his high school’s advanced chemistry courses, he found chemistry “tangible and applicable to real life phenomenon.”

“There was always a natural interest for me to figure out how things worked, so when I was able to connect chemistry with everyday life like the makeup of basic household commodities that I’d regularly stumble upon, I knew I wanted to go further with chemistry,” says Priestley.

Priestley’s research on the structure of polymer molecules and the changing behaviors of molecular activity on a nano-scale indicated the elevated research levels required of Ivy League professors. In developing research around polymer science, he was awarded several honors. His research proposition, coupled with many awards, positioned him to be one of the first Black professors to start on a tenured track within Princeton University’s chemical and biological engineering department.

For Priestley, many of his credentials were the result of his relentless focus toward establishing a leading group of researchers and an unparalleled topic of study. Within a competitive environment like Northwestern, he found that fellow students, particularly his White and Asian counterparts, were “laser-focused” on their area of study. Yet minorities seemed to have an alternative interest during their graduate studies experience, one that derailed them from competing adequately.

Priestley plans to lead a team that contributes to groundbreaking research around polymer science. Eventually, he hopes to be recognized as a leading expert in the field, which ultimately would invite several opportunities, such as directorial and executive positions.

“I’m interested in the physics of polymeric materials and the development of new polymeric systems as responsive and self-healing membranes, especially since polymeric membranes are a practical option for energy-efficient gas separation and water purification,” Priestley says.

According to his colleague Yunlong Guo, a postdoctoral research associate among the polymer research group at Princeton, Priestley already exemplifies an expert. “In working alongside him within the past four years, he’s always impressed me with his innovation and his ability to create conversation about innovation,” Guo says.

Guo further elaborates that many research leaders struggle with balancing meticulous research and leading others to perform such research. However, Guo recognized Priestley’s leadership capabilities as “competent and competitive” as he endures the complexities of scientific discovery.

For this reason, Priestley advised undergraduate students interested in scientific research to “obtain research as early as possible.” In producing early scholarly work, students train themselves to thrive in competitive environments. Certainly, Priestley’s training with scholarly research prepared him for the rigor of graduate school, where the entire four years encompassed endless research. As a result of his diligence, he was awarded with opportunities to take his research abroad and travel to foreign cities like Paris.