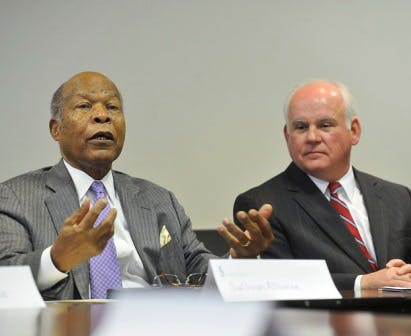 Dr. Louis Sullivan, left, and Dr. Ray L. Watts are members of the consortium focused on increasing the numbers of minorities in health care.

Late last week, university and college leaders representing more than a dozen Alabama institutions entered their respective schools into a consortium organized to increase the number of minorities in the health care professions. Known as the Alabama Alliance, the consortium includes both community colleges and historically Black institutions and is based at the University of Alabama at Birmingham (UAB) Medical Center.

“What we’re doing in Alabama today (to increase underrepresented minorities in health professions) will have an impact today, 10 years from now and 30 years from now,” said Dr. Louis W. Sullivan, an alliance organizer and a former U.S. Secretary of Health and Human Services, on Friday during the meeting at which the Alabama Alliance was formally launched.

Sullivan, also the founder of the Sullivan Alliance to Transform the Health Professions, told Diverse that the Alabama Alliance is one of several state-based academic networks the Sullivan Alliance has helped develop since it was founded in 2005. “What we’ve done is work at the state level to form alliances between academic health centers and colleges that have high numbers of minority students … to form programs that would strengthen the (minority student) preparation for a career in the health professions,” he said.

“The core program that we develop in these states are usually summer research experiences for the students in the academic health centers and in so doing the students not only gain experience and exposure to research programs but they (work) on problem-solving skills and they have exposure to a number of conferences,” Sullivan said.

Sullivan said students at the Alabama Alliance schools stand to benefit from having UAB as its anchor institution for the consortium. “One of the things that is striking is that the University of Alabama Medical Center is one of the largest and strongest academic health centers in the nation,” he noted.

“To really undertake a health initiative in Alabama, having UAB as part of that effort is very important,” Sullivan said.

Dr. Ray L. Watts, UAB senior vice president and dean of the School of Medicine, said faculty and staff members at the Birmingham-based university “celebrate diversity.”  University officials “are pleased to have colleagues from colleges and universities from around the state here today to align ourselves together to provide outstanding opportunities for all our citizens, and in particular, provide exceptional opportunities for underrepresented minorities so we can have a healthcare team and workforce that represent our people,” he explained.

Sullivan said officials have been mindful of the health care challenges present in Alabama. “Some 55 of 67 counties in the state have a shortage of primary care physicians. The health status of people here in Alabama is below the national average when we look at things, such as infant mortality. The life expectancy rate for Alabamians is not as great as the national average so there are number of things needed here to improve health of the state residents,” he said.

While alliances exist in Virginia, Maryland, Ohio and Florida, Sullivan sees Alabama as the blueprint for initiatives in deep South states. “When I think about Alabama (the Alliance) could serve as a model for the other states in the South that have similar problems — Mississippi where we have discussions under way about a possible alliance, Louisiana, Arkansas. All of these states have challenges,” he noted.