Playing for the President, Grambling Marching Band to Return to Washington 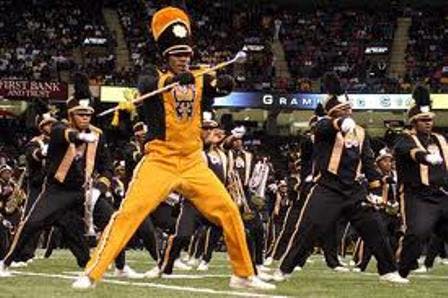 In addition to the band, the university is sending more than 100 students, faculty members and staff members on two buses as inauguration observers.

With President Barack Obama set to begin his second term during next week’s inauguration in Washington, the Grambling State University Tiger Marching Band expects to make history as the only college or university band to perform during the Obama inauguration parades of 2009 and 2013.

“We’d like to think that it was something unique in the (first) performance that’s allowing us to come back for a second time,” band director Larry Pannell says. “We’re just elated and pleased that we have an opportunity to go back.”

The only other school band traveling to Washington for a second Obama inaugural parade will be the one from the Punahou School, Obama’s high school alma mater in Honolulu, Hawaii.

“Obviously, that’s a very prestigious invitation for any organization. And for an institution like Grambling State University to get that extended to them for a second time, I think it’s extraordinary and well-deserved,” says Dr. Willie Hill, the director of the Fine Arts Center at the University of Massachusetts Amherst and an alumnus of the Grambling Tiger Marching Band.

Some 202 members of the 250-person marching band will be traveling this weekend by bus from Grambling, La. to Washington, D.C. to perform in the nation’s 57th inaugural parade. Grambling officials say they are seeking to raise at least $125,000 to cover the cost of the trip. Pannell says Grambling’s marching band also played at former President George W. Bush’s first inauguration.

In addition to its repertoire of patriotic marching tunes like John Phillip Sousa’s “Stars and Stripes Forever,” the renowned marching band expects to enliven the festivities with selections such as Whitney Houston’s “I Wanna Dance With Somebody” and Gap Band’s classic “Early in the Morning,” according to Pannell.

“I got a brilliant idea from watching (Obama) deal with the (fiscal) cliff and trying to make sure he got a budget that would work. I watched how he got up early and stayed up late trying to get something passed,” he says.

“And I decided that we could step out and play “Early in the Morning” when [the band] passes by him. He’ll get the message from a soul (music) standpoint that you have to get up early in the morning and you’ve got to spend some hours late at night to deal with all that he’s got on his hands. … (We’re)  being a little bit more daring this time,” Pannell explains.

In addition to the band members traveling to Washington, David Rusty Ponton, dean of student activities at Grambling State, said the university will be sending more than 100 students, faculty members and staff members on two buses as inauguration observers. Along with inauguration activities, the group will participate in tours of historic sites and monuments in Washington and Williamsburg, Va.

“One of the places on our schedule is the Martin Luther King Jr. Memorial,” which was unveiled in 2012, Ponton says.

In 2009, the university had sent a delegation of Grambling students, faculty members, and staff members to the Obama inauguration. Despite some hardship with a bus breaking down and bitterly cold weather, the journey proved “a life-changing” trip for many of the participants, according to Ponton.

“This was a learning experience that you couldn’t capture in the classroom. … So we see this second Obama inauguration as another once-in-a-lifetime experience for our students, faculty and staff,” he says. “It’s like an eclipse.”