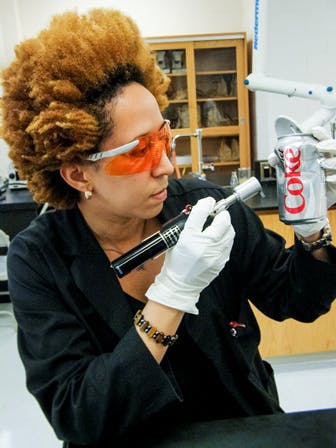 When Dr. Karla-Sue Marriott interviewed in 2006 for a teaching and program post in the College of Science and Technology at Savannah State University, Dr. Jonathan Lambright was a faculty member.

The young chemist, he recalls, was “very genuine, very down to earth, and very accomplished, academically,” Lambright says enthusiastically before easing into one of the things that also “makes her unique.” At first glance, says Lambright, now interim dean of the college, it’s Marriott’s hair: “It’s stunning; it’s just beautiful. It looks like her face is engulfed in the sun.”

“That’s me,” Marriott says matter-of-factly of the familiar description her big hair often elicits. Keeping most things in her busy academic life unfettered and real is how Marriott says she likes to operate. “I don’t want to have to think about decisions — what to do with my hair or what outfit to choose for work in the morning,” she explains.

Marriott is on a mission in the classroom and in her laboratory. During her first five years at Savannah State, the new professor worked with other faculty and administrators to transition a minor in forensic science to an undergraduate major with concentrations in chemistry and biology. The program was one of the first in the state of Georgia. Since 2011, the program has been training graduates who are competitive and prepared for positions in areas like toxicology and criminal justice, says Marriott, whose first job out of college was as a forensic officer in charge of rape and murder cases.

The Jamaica-born Marriott grew up in Kingston, the only child of a single mother. Graduate school is where Marriott says she blossomed, but getting there was a rocky road. Growing up, she disdained school, even college for a short time, and was admittedly “lousy at math and didn’t know how to study.” But with each seemingly bleak academic valley she found herself in, Marriott managed to climb out just in time to earn stellar marks in her favorite subjects — biology, physics and chemistry.

She was an anomaly to many of her teachers who were challenged to figure out what worked to reach a brilliant student who could quickly shut down, then power up when she felt motivated, leaving her classmates in the dust. Marriott would shock some when she managed to earn top scores on rigorous entrance exams that allowed her to enter one of Jamaica’s top prep schools and universities. But despite those academic successes, all Marriott wanted to do with her life after high school was stick close to the people who raised her and to “start a plant business” with her mother.

Today, Marriott enjoys being in the classroom and turning students on to chemistry and learning in ways that are engaging and that even make room for art and film, she says. As co-principal investigator on an NIH Minority Biomedical Research grant, Marriott is concerned about increasing the number of underrepresented researchers entering graduate school in a STEM discipline. But her current research has her excited and poised for a breakthrough.

Building on numerous research focused on altered cholesterol metabolism and its impact on the brains of those with Alzheimer’s, Marriott says, “We want to prevent the onset or at least retard the progression of the disease.” Her research, published in the December 2012 Journal of Bioorganic & Medicinal Chemistry, is creating buzz because it points to the potential not only to contribute to a better understanding of the “biochemical mechanisms involved in neurodegenerative diseases like Alzheimer’s,” but to the development of sought-after therapeutic agents to treat them.