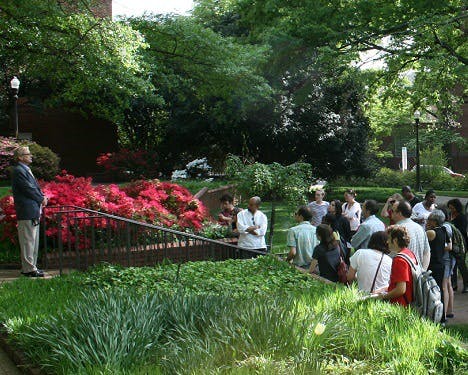 “We wanted to have a way to sustain the history so the campus could understand it’s [and] everyone’s history — that the African-American history here at North Carolina State University doesn’t exist in a vacuum,” says Toni Thorpe, program coordinator at the university’s African-American Cultural Center.

The North Carolina State University Libraries organization first released the app in November 2011 to replicate the experience of an actual walking tour that has been offered since April 2011. That walking tour, however, is held just once per semester, and is conducted by Thorpe and Dr. Walter Jackson, a NCSU history professor. The hour-long tour has typically ended with a reception organized by the African-American Cultural Center, she notes.

Although Thorpe prefers N.C. State community members and campus visitors take the guided tour from Jackson and her, she says that “rather than miss out on the information, we wanted it to always be accessible. What we have found is that students will often take the walking tour with the technology and then follow up with the walking tour.” The digital walking tour of N.C. State uses a location-aware campus map. Users can browse events by date or place and view related historical images.

Highlights of “Red, White & Black” include the story of Ellen McGuire, a former slave who retired from N.C. State after working for fifty years for the school. The app highlights the enrollment of four Black undergraduates in 1956, and documents when Robert Clemons became the first African-American graduate in 1957 after earning a professional degree in electrical engineering. The app even documents events in 2010 when students were confronted with racial epithets painted in the Freedom Expression Tunnel.

According to the university, the tour “integrates extensive existing digital collections from the NCSU Libraries with student research and student readings to provide access to events, images and stories that help to tell this important history.” The app is location-aware, and owners of devices that do not support GPS or other location-detection technology can still manually navigate through the historical website tour.

“With the app, [African-American history is] not just relegated to February; it’s available all year. The thing that we really like is that if you are a parent or a student, you can use it whenever you want,” says Marian Fragola, the director of program planning and outreach for the North Carolina State University Libraries.

After learning about a historical walking tour being conducted the University of North Carolina –Chapel Hill, Fragola says she began working with Thorpe and history faculty members to develop one at N.C. State that focused on the school’s own African-American history. “I thought it was such a great idea. … We have a lot of archival materials of pictures, letters to the university” and other items illustrating the history of Blacks affiliated with the school, she recalls.

Within the university libraries organization, there is “a group called the Digital Library Initiative team, and they developed the actual app,” Fragola notes.

“We have this wonderful opportunity to talk about parts of N.C. State’s history that doesn’t get looked at all the time. And the app tells different and unique stories, and stories of segregation and then integration, and then bringing it all to the current history,” she says.