Holmes Scholars: The Next Generation of Higher Education Faculty 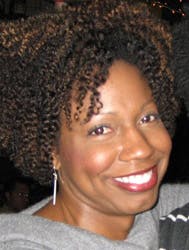 Orlando, Fla. – When Saron LaMothe served as counselor for several K-12 schools in some of this city’s most impoverished areas, she used to pick up on cues from Black students indicating that they felt they weren’t meant for certain careers.

Sometimes, she said, the cues were explicit, such when top-performing Black high school students expressed that they felt they were “acting white” for wanting to take advanced studies and pursue certain high-status professions.

Other times, LaMothe said, she got the subtle sense that some Black students—often as young as elementary school—could not envision themselves as doctors or in similar professions

“And I would want to explore: Why is that?” LaMothe said.

LaMothe is getting the chance to explore those questions and others as doctoral student through the Holmes Scholars program in the College of Education at the University of Central Florida, or UCF.

The program, which has been adopted by several institutions of higher learning throughout the United States, helps prepare members of underrepresented groups for jobs in the professoriate.

Were it not for the generous funding provided through the College of Education at UCF and the mentoring and networking support provided through Holmes Scholars, LaMothe said, a Ph.D. and the prospects of becoming a professor would simply be out of reach.

“For me, personally, I would not be here if the College of Education at UCF did not say, ‘We believe in you and we want to fund you financially to pursue this degree,’” LaMothe said. “I would not be a Holmes Scholar. I would have to either find another university or find another career path.”

Dozens of Holmes Scholars and alumni from the program shared similar stories Wednesday as they gathered for their pre-conference meeting for the annual meeting of the American Association of Colleges for Teacher Education, or AATCTE, which houses the Holmes Scholars program.

AACTE leaders say the Holmes Scholars program is one of the most vital initiatives helping to change the face of American academe.

“We know we need to nurture diversity within the professoriate within higher ed,” said AACTE President and CEO Sharon Robinson. “Our effort contributes to that diversity.”

The program’s positive reputation transcends the ranks of AACTE.

Dr. Orlando Taylor, a veteran higher education administrator who currently serves as Washington, D.C., Campus President and Chief Advancement Officer for the Chicago School of Professional Psychology, praised the Holmes Scholars program for making a “significant contribution to the nation by preparing the next generation of higher education faculty for the field of education.”

Since the program was established in 1991, more than 600 students have benefited, and more than 200 are now in tenure-track and leadership positions, according to AACTE.

They include individuals such as Dr. Jacob Easley II, Chair of the Education Division at the University of Pittsburgh at Johnstown and president of the National Association of Holmes Scholars Alumni or NAHSA.

Easley said the camaraderie and networking provided through the Holmes Scholars program and its alumni association is invaluable to minority professors working at mostly White institutions, where their views and issues may not be so readily understood.

“Outside of HBCUs, the number of minority faculty tend to be very small at most traditionally White institutions,” Easley said. “So it really does help you navigate multiple norms or multiple cultures at the same time.”

In 2009, Easley said, NAHSA began to pair current Holmes Scholars with alumni who mentor them for an academic year. The organization also conducts “tenure retreats” for advanced level scholars and early career faculty members to get on the path to tenure.

Scholars who have worked in the K-12 arena, such as LaMothe, will play a critical role in improving the educational experience of children from families of lesser means, Hopp said.

“The voice of the professor of color is very crucial,” Hopp said. “The doctoral studies strengthen the voice.”

LaMothe said she hasn’t decided on a specific topic for her dissertation, but she is leaning toward examining the effects of “stereotype threat” on the academic performance and career aspirations of elementary school students. In short, “stereotype threat” is a phenomenon wherein individuals are anxious about potentially confirming a negative stereotype of their particular group to the point where it negatively affects their performance.

LaMothe believes that, by identifying how this phenomenon affects young children, it could illuminate ways to prevent it from affecting them later on in life.

She wants to target her research toward those who work the job that she used to work.