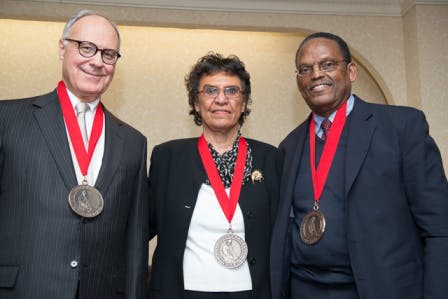 John Casteen, Mary Hatwell Futrell and William Julius Wilson were winners of the 2013 John Hope Franklin Awards presented Monday by Diverse at the 95th annual meeting of the American Council on Education.

WASHINGTON, D.C. — The first full day of  the American Council on Education’s 95th annual meeting unearthed both a concern for the future of higher education and a glimpse of  what success looks like.

Certainly, there are unanswered questions on how to sustain the complex fiscal model.  Perhaps that’s why Roosevelt University President Charles Middleton referred to the issue Monday as one that closely mirrors Sir Arthur Conan Doyle’s plot around the “dog that didn’t bark.”

Middleton suggested, like Doyle’s inference to the dog’s recognizable visitor in detective series “Sherlock Holmes,” the circular problem of higher education budgeting is no stranger to the professoriate. With stress on higher education to unite college affordability with college accountability, administration has struggled to foresee a sensible solution, as institutions are continually without adequate resources. The constant struggle and no clear indication of effective recovery is why teachers and administrators are not “barking” about the complexity of fiscal sustainability, according to Middleton.

“There is a moment in one of the Holmes books that the key to the understanding of the perpetrator and identifying the perpetrator is known as the ‘dog that didn’t bark,’ and today there is a dog that isn’t barking,” Middleton said.

Contrasting the angst about the future and exemplifying the conference’s theme of “Leading Change,” three contemporary giants in the realm of  higher education were honored with the 2013 John Hope Franklin Award. Former University of  Virginia President John T. Casteen, women’s rights and education advocate Mary Hatwood Futrell and acclaimed sociologist William Julius Wilson were cited by Diverse for work that carried on the legacy of  the legendary late historian, writer, educator and humanitarian.

All the honorees recounted the manner in which Franklin, who died in 2009 but had been involved with the award since its inception in 2004, touched their lives and were united in their view of  challenges that lie ahead, including the financial aspect.

Without a concrete answer to the problem, Middleton suggests that current administrators and teachers are almost neglecting the higher education budgeting crisis.

“It’s starts on with the supposition when you ask faculty members what they’re working on, they almost always talk about their research or a piece of writing or something that they’re doing non-professoriate … but to talk about one’s work as a teacher seems almost declasse,” Middleton claimed.

According to Middleton, “This is the nub of future discussion that we have to have at our institutions if we are to maintain or enhance the quality on one hand, and on the other hand, finding financial ways that we can do that work.”

Higher education administration has yet to introduce a solution, especially with annual tuition increases reaching a commonplace.  While there is a strong familiarity of fiscal problems, discussions around the notion are becoming repetitive and are summarized as the “bubble” in higher education, as Middleton suggested. Financial consultant Bain and Company echoed Middleton’s observation in a report it released last year, which described higher education as a business model facing liquidity crisis. Bain’s premise explained that institutions have more liabilities without revenue or cash reserves to support its assets.

Although administration is at a disadvantage with its “broken” business model, there are still areas of improvement that schools can tap into to operate while enduring rising inflation, according to Middleton and supported by the Bain report. Much of that improvement will rely on the need to cut back on resources. Referred to as “reversing the law of more,” institutions will need to reduce administrative costs.

Ball State University, a school that heavily relies on tuition for revenue was among many institutions that implemented hiring freezes and faculty cuts. In addition to faculty cuts, the institution utilized resources that could make a larger impact than employee downsizing. Their geothermal project replaced the school’s four aged boilers with a heat pump system that relies on the natural environment’s ability to store heat in the ground.  Reportedly, the university saved $2.3 million on annual spending and created around 2,300 jobs. According to Jo Ann Gora, president of Ball State University, cost-saving efficiencies and particularly the geothermal project saved students $2,458 in tuition costs.

“As much as we have reduced the costs on campus and been able to reap back significant efficiencies, we have kept our emphasis where it should be and that is on our academic programs,” Gora said.

Likewise, Mount Ida College, a small, private college in Massachusetts, reversed the ‘law of more’ by cutting administrative costs through their senior living model. The set of apartment buildings is used to make a profit through recruiting outside senior citizens to live in buildings on campus property as a way to stream revenue back into the institution.

“The senior houses [have] classes, food services and an IT provider, and we’ll charge for all those services,” Mount Ida President Barry Brown said.

As universities continually figure out how to further cut costs and decrease tuition levels, the crisis of affordability will still be unanswered and claimed as “the dog that didn’t bark,” according to President Middleton.