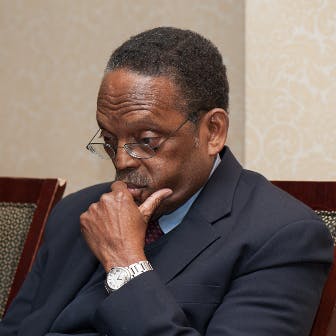 Casteen is best known for his 20-year tenure as the president of the University of Virginia, during which time the school’s enrollment of women, minority and economically disadvantaged students increased dramatically. According to Casteen, Franklin’s knowledge and commitment to the school influenced his approach to leading the university.

“I, on two occasions, sat next to Dr. John Hope Franklin in which he was chairing the selection of Woodrow Wilson fellows, but I spent the day sitting next to Dr. Franklin, handing him and filing papers,” said Casteen at the reception hosted by Diverse: Issues In Higher Education, creator of the award. “It was a lesson and a combination of brilliance and humility to watch him talking about the prospects of opportunity that these young people faced.”

Like Casteen, Futrell admired the work that Franklin performed in higher education, particularly his laying the scholarly foundation that led to the landmark Brown v. Board of Education case.

“When I think about Dr. John Hope Franklin, I think about the fact that he constantly reminded us that this society and nation have made a lot of progress, but we still have a long way to go,” Futrell said.

Wilson remembers Franklin as a mentor and friend. Wilson, a professor at Harvard University, found most of his success through published works. Like Franklin, Wilson was immersed in the studies of race and higher education and recognized the problem of Black isolation on college campuses and universities.

“Being a Black faculty member at a White institution in the age of affirmative action, we’ve both emphasized how important it is to be fully integrated into the activities of the universities,” Wilson said.

Noting that Black isolation is often self-driven, Wilson admired the common goal that he and Hope shared in regard to advocating integration.

“And we both resented the fact that many young Black professors who were finally getting the opportunity to teach at predominantly White universities and colleges had a tendency to isolate themselves, as they sought refuge in the Black sub-community on their campuses in search for self-affirmation,” Wilson said.

Franklin Award winners since its creation in 2004 include Maya Angelou, historian David Lewis, Clifton Wharton Jr., and the Bill and Melinda Gates Foundation.