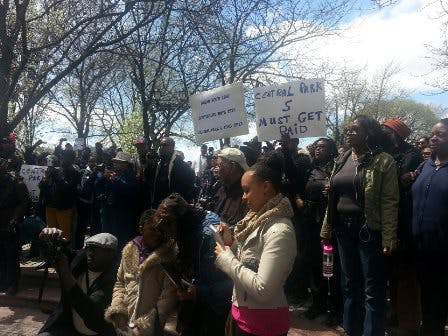 Calls for a financial settlement for the five wrongly imprisoned men and Elizabeth Lederer’s ouster intensified recently after a documentary on the case was broadcast on PBS.

NEW YORK — Twenty-four years after five Black and Latino teenagers were wrongfully imprisoned and convicted for raping and beating a White female jogger in Central Park, hundreds of activists converged in the park Saturday to demand that the city settle a lawsuit filed by the men now known as the “Central Park Five.”

Holding signs and chanting, the activists also called attention to an online petition that is currently circulating, calling on Columbia University to fire part-time law professor Elizabeth Lederer who along with Linda Fairstein were the lead prosecutors who handled the botched 1989 case.

“Elizabeth Lederer was among those who destroyed the lives of these young men by moving forward with her case even though there was no credible evidence, except coerced confessions demanded by police officers,” says Charles Johnson, a community activist and an alumnus of the Ivy League school. “It’s scary to think that she is now training the next generation of lawyers. She really needs to go.”

Fairstein, who headed the Manhattan sex crimes unit from 1976 until 2002, stepped down from her position in 2002 and is now a novelist. But Lederer still works full-time as an assistant district attorney. She could not be reached for comment, and David M. Schizer, dean of the law school, did not return several calls seeking comment.

Though the Black Law Student Association at Columbia has not formally taken a position on Lederer, several students contacted by Diverse anonymously expressed concerns about her visible teaching role on campus.

Calls for Lederer’s ouster intensified recently after a documentary made by filmmaker Ken Burns and his daughter Sarah was broadcast on PBS. Trisha Meilli, a 28-year-old investment banker, was raped and beaten, reportedly by a “wilding” mob of Black and Latino youth.

Police quickly arrested five suspects: Yusef Salaam, Raymond Santana, Kevin Richardson, Antron McCray, and Kharey Wise, who later said that their confessions were coerced by police. At the time, only a handful of people, the Reverend Al Sharpton, the most prominent among them, expressed support for the teenagers.

But after serving varying years in prison, the men were eventually released, and their convictions were vacated in 2002 after Matias Reyes, a convicted rapist and murderer who was already serving a life sentence for other crimes but who had not been charged in the attack on Meili, admitted that he had committed the assault when he was 17 and that he had acted alone.

But the city has refused to settle the case. “We believe that, based on the information that the police and prosecutors had at the time, they had probable cause to proceed and the confessions were sound,” says Celeste Koeleveld, the city’s executive assistant corporation counsel for public safety, who says that the documentary on the case was biased. “Mr. Burns and his daughter have publicly sided with the plaintiffs and their families, who are seeking hundreds of millions from New York City. The movie has crossed from documentary to pure advocacy.”

That talk frustrates Salaam, who spent eight years in jail for a crime he did not commit.”

“The city doesn’t want to admit any wrongdoing,” says Salaam. “They feel that we will just go away the longer it goes on, but we won’t. We lost so much time and our families lost so much, and no one who was responsible said that they were sorry about it. That’s not right. Somebody needs to stand up and take responsibility for the way the case was handled. There was nothing that linked us to this crime, and yet we were convicted and paid for it.”

Amos N. Jones, a professor of legal ethics and expert on race discrimination at Baptist-affiliated Campbell Law School in Raleigh, N.C., questioned why Lederer’s biography on the Columbia Law School website appeared to have touted her involvement in the Central Park jogger case “but recently expunged that legacy from it” after Burns’ documentary aired.

Jones said that, allegations of prosecutorial misconduct aside, lawyers have a professional obligation across jurisdictions to act honestly so as “not to bring the profession into disrepute.”

“As officers of the court, lawyers are supposed to model integrity, and as guardians at our profession’s gates, law professors have a special obligation to go about their professional pursuits with the utmost character,” says Jones. “At the very least, this biographical-sketch about-face suggests that somebody has some explaining to do.”