Diverse Docket: Judge Rules Miami U. Did Not Discriminate in Tenure Case 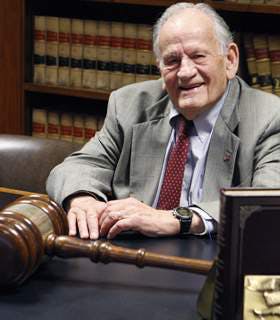 U.S. District Judge S. Arthur Spiegel said Dr. Marvin Thrash did not prove that Miami University discriminated against him in denying him tenure.

A federal judge in Ohio has rejected a race discrimination suit by a Miami University engineering faculty member who was denied tenure on the basis of insufficient research.

U.S. District Judge S. Arthur Spiegel said Dr. Marvin Thrash, who is Black, failed to show that the university’s rationale was a pretext for discrimination and didn’t demonstrate that he was at least as well-qualified as two White faculty members who did receive tenure.

Thrash will appeal, said his lawyer, Marc Mezibov of Cincinnati.

In 2004, Thrash joined the Department of Paper Sciences and Engineering as a tenure-track assistant professor. It was an opportunity hire through a program that created a “financial incentive” for academic departments to increase the number of under-represented minorities among the faculty.”

Six outside evaluators reviewed his candidacy for tenure and submitted a mix of positive, negative and “lukewarm” reviews, the decision said. However, Mezibov said all the evaluations were favorable.

The university’s promotion and tenure committee declined to recommend him, according to the decision. It found Thrash’s teaching, advising, service and collegiality to be adequate but “critiqued the quality of his research and found insufficient published research in peer-reviewed journals.”

When the university terminated Thrash in 2012, he sued, claiming his department chair worked against his eligibility for tenure and refused to consider outside evaluators from HBCUs.

Rejecting those allegations, Spiegel noted that the chair did accept three African or African-American outside reviewers that Thrash proposed and rejected from non-HBCUs due to their lack of qualification.

The decision also said that both the White colleagues who won tenure had “far more significant research published and obtained grants that dwarfed Thrash’s contribution to the university.”

A Hispanic former assistant director of community relations at Temple University has lost an employment discrimination case arising from elimination of the position he’d held for 15 years.

Juvencio Gonzalez accused the university of race and national origin discrimination after a departmental restructuring under an African-American senior vice president for government, community and public affairs. The restructuring eliminated two assistant director jobs—that of Gonzalez and of a Black woman—to provide money to fund a new assistant vice presidency.

During the four months between Gonzalez’s notification and termination, Temple had 110 positions for which he met the basic requirements, U.S. District Judge Mary McLaughlin said. However, he applied for only four, two of them “several steps up the seniority scale” from his abolished job. He withdrew two applications, was unqualified for a third position, and a more qualified applicant filled the last opening.

His colleague who also lost her assistant director position found another job on campus.

The suit originally claimed the new senior vice president wanted to change “the face of Temple to the neighborhood Black community from a brown face to a black face,” but later claimed it was discriminatory to offer a new job to his Black ex-colleague but not to him.

McLaughlin was unpersuaded, saying the restructuring “was not, as Gonzalez suggests, a fake or illusory reorganization.”

In addition, she said Temple officials and the human resources staff tried to help Gonzalez locate an alternative place at the university but he “failed to take full advantage of their help, believing that he would be offered a new job without expending much effort to find one himself.”

McLaughlin also noted that Temple didn’t replace Gonzalez with an African-American woman as he asserted. Rather, the person hired for the new assistant vice presidency didn’t take over any of his responsibilities.

Requiring a doctorate for a tenure-track position is a legitimate nondiscriminatory reason to reject an applicant without the degree, according to a federal appeals court.

In addition, an unsuccessful applicant’s failure to accept the university’s earlier offer of a leave of absence and financial assistance to complete a Ph.D. precluded her from qualifying for an exception to the terminal degree requirement, it said.

The ruling came in a gender and national origin employment discrimination suit by a long-time fixed-term graphics instructor at the University of Puerto Rico (UPR) Mayaguez campus.

U.S.-born Christine Johnson, who has a master’s degree, taught in the Engineering Department for 12 years under semester-by-semester temporary service contracts, starting in 2001, the decision said.

In 2006, the board of trustees adopted a personnel regulation requiring a terminal degree for tenure system appointments. It authorized exceptions for applicants with “exceptional merits in the field of their specialty” or with a “recognized competency in an area of difficult recruitment of skills,” but only if they agree to obtain the terminal degree in a reasonable amount of time.

In 2008, UPR posted tenure-stream assistant professor positions in the department. Of 10 applicants, six had Ph.D.s and two others were in doctoral programs. The search committee ranked Johnson fourth.

The university hired the top three, all with Ph.D.s. One is a woman and the other two were men born in other countries.

Johnson filed a Title VII suit alleging that the university’s reliance on her lack of a doctorate was a pretext for discrimination, but a lower-court judge threw out the case without trial.

In unanimously upholding that decision, the 1st Circuit U.S. Court of Appeals said Johnson failed to show that she was qualified for the position. The university’s degree requirement “was reasonable on its face and was plainly legitimate,” Chief Judge Sandra Lynch wrote on behalf of the three-member panel.

“The requirement helps promote the teaching of the most up-to-date scholarship to students, provides prestige to UPR, helps it compete with other universities around the globe, is required for UPR to be a Ph.D.-granting institution and helps it obtain funding since research professors with doctorate degrees are basically its main source of research funding,” Lynch said.