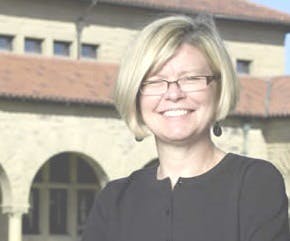 From 2008 to 2013, Stanford University saw the share of underrepresented minorities in the school’s faculty cohort increase by 43 percent while the entire cohort jumped 9 percent. Underrepresented minorities (URM), which include African-Americans, Latinos, and Native Americans, make up 7.3 percent of the university’s faculty, according to the university.

In an effort to ensure that Stanford retains those URM faculty members while continuing to make new hires, university officials are considering recommendations from a just-released report that aim to improve the campus climate such that URM faculty members feel more appreciated and valued at Stanford.

The recommendations, contained in “Quality of Life Survey Follow-Up Study of Underrepresented Minority Faculty at Stanford University: Report #1 – Recognition and Collegiality,” are presented “as a series of goals and suggested actions to be undertaken by the university, schools, departments and/or the faculty at large.” On Wednesday, the university released the report by the Panel on Faculty Equity and Quality of Life and convened a town hall meeting at which the report was discussed.

While the report released this week focused on recognition and collegiality, a second part focusing on mentoring and a voice in decision-making will be released in the fall, according to the university

“It is vitally important that all faculty members experience an encouraging and rewarding environment, and that we pay attention to the issues raised in this report,” Dr. Karen Cook, vice provost for faculty development and diversity, said in a statement.

In addition to expanding existing Stanford programs that have helped attract URM faculty to the university, the report advised boosting opportunities for faculty to interact over research and placing greater emphasis on diversity to increase overall faculty commitment to it. Dr. Shelley Correll, sociology professor and chair of the Panel on Faculty Equity and Quality of Life, said the recommendations once implemented should help URM faculty feel more engaged with their colleagues on research and help them avoid being overwhelmed with diversity-related service activities.

“We believe that we should broaden the number of faculty who participate in diversity work such that underrepresented minority faculty don’t become overburdened with that activity, which is something they value,” Correll said.

The report cites six underlying findings that document the most commonly shared experiences among the cohort of 52 URM faculty members who participated in in-depth interviews for the report. The findings are:

1) Faculty feel valued, recognized, and part of a collegial environment when colleagues engage with and express appreciation for their scholarship.

2) Faculty often experience “research isolation” when they lack colleagues whose research is similar enough to provide feedback or to collaborate with.

3) Some faculty members feel that scholarship on race/ethnicity is marginalized in their campus units.

4) URM faculty perceive that they perform a disproportionate amount of diversity-related university service and feel that such service is often not recognized or rewarded by unit leadership.

6) A collegial work environment that communicates value and respect for a faculty member’s work is critical to satisfaction and increases the likelihood of remaining at Stanford.

Dr. Ansley Abraham, director of the Southern Regional Education Board-Alliance for Graduate Education and the Professoriate Program Doctoral Scholars Program, said it’s critical for research institutions, such as Stanford, to understand how their minority faculty members are coping in their professional lives.

“If an institution is doing an evaluation of its diversity efforts … campus climate has a lot to do as to whether people stick around. Some places are pretty acerbic in their atmosphere, in their environment and people don’t want to stay around them,” he said.