AACC Preparing the Next Generation of Community College Leaders 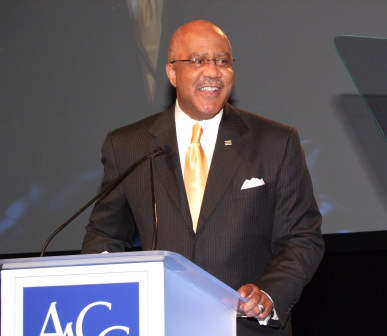 AACC President Walter Bumphus urges rising leaders to embrace diverse leaders, as “the diversity of your team can help you make better decisions.”

Dozens of aspiring community college CEOs descended on Baltimore this week to learn keys to career success from noted practitioners and thinkers in the community college leadership realm. On Monday, American Association of Community Colleges President and CEO Walter Bumphus helped kick off the Roueche Future Leaders Institute/Future Presidents Institute with a presentation titled “The Community College Leader: Challenges, Expectations and Rewards,” during which he related powerful and poignant reflections on his four-plus decades of community college leadership experience.

Bumphus spoke of his experiences as chancellor of the Louisiana Community and Technical College System when hurricanes Katrina and Rita hit, noting that amid the devastation caused by the natural disasters, the system lost 60 percent of its enrollment, and to this day, one campus has still not opened. He cautioned the rising community college leaders in the audience that unexpected events like Hurricane Sandy, tornadoes in Oklahoma and campus shootings happen, and leading the way through such crises comes with the territory.

Bumphus, the winner of the 2013 Diverse Champions Award, also spoke of community colleges defying the odds when it comes to the academic success of their minority students, noting that Valencia Community College in Florida won the Aspen Prize for Community College Excellence in the past, and top honors this year went to Walla Walla Community College (Wash.) and Santa Barbara City College (Calif.).

Valencia Community College and Miami Dade College, “two institutions that have great diversity … are graduating now, their students of color, at or near the same rate, and in some cases, higher than their majority students. The same thing with Walla Walla Community College and Santa Barbara City College. That tells me it can be done. But it’s really hard work,” Bumphus said.

Bumphus, an African-American, also spoke of his experience applying for a college presidency for the first time in Maryland in an era when no community college in that state was led by a woman or person of color. Hinting that part of the reason he did not get the job had nothing to do with his credentials or preparation, Bumphus urged the rising leaders in the room to embrace diverse leaders, as “the diversity of your team can help you make better decisions.

“Unfortunately, there are far too many leaders who are unwilling to hire people different than them. And you can talk about whether they are folks from a difference racial background, or folks that are better looking, have a better car — I’ve seen all those things happen.” Ultimately, Bumphus said, decisions about the potential of a leader to shine must be based on a holistic, objective assessment. “You can’t really make those kind of determinations by just looking at someone.”

Later on Monday, League for Innovation in the Community College President Emeritus Terry O’Banion made a presentation titled “The Completion Agenda,” during which he spoke of the importance of staff development to completion, a major emphasis of AACC as detailed in a recent report issued by AACC’s 21st Century Commission on the Future of Community Colleges. This emphasis is a shift from the focus on community college access of recent years.

O’Banion said that in his many travels to many community college campuses across the country, he has seen faculty development workshops with titles such as “Vetting Your 401k,” “Yoga for the Classroom” and “Your Astrological Sign.” Such topics will not move the completion ball forward, O’Banion stressed.

“Staff development is the Achilles heel of the completion agenda,” O’Banion said, noting that every national report on the subject “concludes with the importance of staff development.”

Later in the day, Cuyahoga Community College (Ohio) President Jerry-Sue Thornton delivered a presentation titled “Leading from the Middle in the 21st Century Community College.” She related a number of leadership experiences, including how and when to part ways with employees no longer passionate about their work, how to handle lawsuits, and she also spoke of the importance of setting completion goals tailored for community colleges.

Thornton spoke of an experience she had at Cuyahoga’s downtown campus, which happens to be situated near a public housing project. After finishing a pleasant conversation with a clerk in the financial aid office there, she noticed a young man in ripped jeans who seemed unsure of himself hesitantly approach the clerk’s window and ask how to enroll. Audible gasps from the assembled rising community college leaders in the room were heard when Thornton said the clerk told the young man she was going on a smoke break and abruptly shut her window.

“For me, that was a really sad thing. Why would you treat the president so nicely, and differently, than you would someone who wanted to take advantage of education?” Thornton said she immediately intervened and asked the student to wait while she addressed his questions because, if she didn’t, she suspected that he would “never come back.

“The reality is the passion for what we’re doing has to be there, because the goal, the mission, is too important not to have it for all of us,” she added.