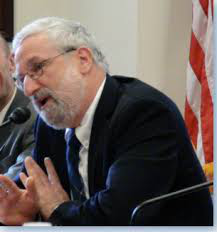 Dr. James Grossman, executive director of American Historical Association, says the annual convention is a place for historians both in and outside of the academy to gather and discuss ideas.

Despite the snow storm that paralyzed much of the East Coast and Midwest last week, hundreds of historians made their way to the nation’s capital for the American Historical Association’s 128th annual meeting.

AHA ― the largest professional organization in the United States devoted to the study and promotion of history and historical thinking — offered a series of workshops for its members at this year’s convention. A wide-range of topics including how to utilize digital history in the classroom and how to fund public history despite budgetary cutbacks at the university level were prominently featured during the three-day gathering.

“We’ve made the argument to administrators that public history is actually a STEM field of sorts, because students learn skills about social networking, writing, researching and audio/visual production,” says Dr. Paul Ortiz, an associate professor of history at the University of Florida and director of the Samuel Proctor oral history project.

Hine, who teaches at Northwestern University and has written extensively about African-American women, said that she was once told by another female colleague that Black women were not worthy of serious intellectual study.

According to Dr. James Grossman, executive director of AHA, the annual convention is a place for historians both in and outside of the academy to gather and discuss ideas. This year’s meeting was themed “Disagreements, Debate and Discussion” with the goal of pushing participants to examine contemporary historical events where historians have radically differed, such as the wars of the 1990s.

In addition, organizers of this year’s conference focused attention on helping history graduate students think broadly about what they might do with their Ph.D.s other than join academe.

Last July, AHA along with the Organization of American Historians (OAH) passed a resolution that recommended that doctoral students be allowed to place their dissertations under embargoes for up to six years after publishing. “History has been and remains a book-based discipline, and the requirement that dissertations be published online poses a tangible threat to the interests and careers of junior scholars in particular,” the organization said.

But at the convention, several current Ph.D.s said that they welcomed the opportunity to have their work broadly circulated in the public domain once they complete their dissertations.

“The benefits of making my work as widely available as possible outweigh any of the kind of fears of getting scooped,” says Cameron Blevins, a doctoral student at Stanford University who participated in a roundtable panel discussion that focused on the topic. “I really think the historical profession needs to really engage with the wider public more explicitly.”