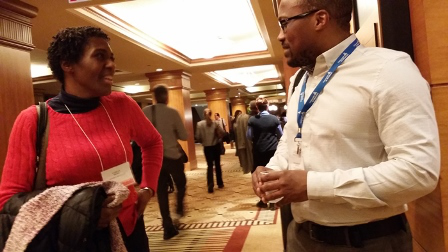 CHICAGO—Professors and graduate students braved subzero temperatures and travel hurdles in snow-laden Chicago last week to convene for four days about the “vulnerable times” in the field of language and literature.

Held from Thursday through Sunday, the 129th Modern Language Association Convention lacked the racial diversity it has seen in years past, one scholar of color noted, which some might read as a testament to certain “vulnerabilities in academia.” Yet attendees found a hefty program that represented a broad — and often arcane — array of scholarly interests.

A special session, titled “The Poetics and Politics of Ecocinema,” drew scholars from as far as Australia and Hawaii, who parsed elements of the fantasy drama film, “Beasts of the Southern Wild.” Another session looked at “black vulnerability in ‘Three Days Before the Shooting,’” the title given to Ralph Ellison’s unfinished second novel.

Altogether, the number of division sessions devoted to African and Black American literature this year totaled seven out of 810 sessions that were spread between two downtown Chicago hotels.

Dr. Candice Jenkins, associate professor of English at Hunter College, presided over a special session titled “(Post)Racial Vulnerabilities,” which looked at minstrelsy, antiracism and inequality. Jenkins drew on the 2007 novel Man Gone Down to “explore what it means to perform a precarious Blackness amidst present-day inequality.”

No topic loomed over the convention more than the acrimonious debate surrounding a resolution critical of Israel because of its refusal to give visas to American scholars seeking to visit the West Bank to work at Palestinian universities. On Saturday, the Delegate Assembly voted 60-53 to adopt a resolution on the matter.

In other news, Dr. Kwame Anthony Appiah, the British-born Ghanaian-American philosopher and Princeton University professor, was elected second vice president of the MLA. In 2016, Appiah will become president of the 30,000-member international association.

Where Appiah takes the association could itself be a heated topic. These are vulnerable times for the association; there’s not just the struggle within the MLA over academic freedom and Israel, but an acknowledgement of a crisis within the profession.

And there’s always the concern among African-American scholars about diversity and plurality, as Dr. Camille Banks, assistant professor in the Department of English and Speech at Daley College in Chicago, pointed out. She observed a drop off in the number of minority scholars attending the MLA convention this year.

“That may be because the so-called minority organizations are stronger,” Banks said, referring to groups such as the College Language Association (CLA) and the Association of Caribbean Women Writers and Scholars. “They’re expanding their conferences, having more forums and publishing more journals.”