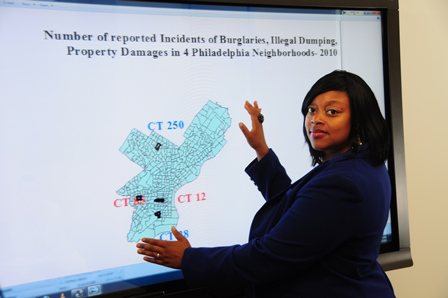 Bridgette BrawnerAs a child, Bridgette M. Brawner saw too much—the strewn drug vials and addicts’ discarded needles that littered her playground, the senseless fighting that hit close to home, more kids on the street than in school and adults who had given up on life. For a time, this was Brawner’s world growing up in the Flatbush neighborhood of Brooklyn, N.Y.

Even through the bright eyes of a 10-year-old, life in her community looked bleak. It was then that Brawner told herself, “There has to be more than this.”

The single mother who raised Brawner uprooted her young daughter and fled to the suburbs for safety. While Brawner says she was able to escape some of the chaos of the streets, she “never stopped looking back” and caring about the people who were left behind.

“I was young, but I knew even then that I wanted to grow up to do something that could make a difference in the world and in the lives of others,” says Brawner.

Decades later, she’s made good on her pledge. Today, that young girl with the tightly held dream is using nursing and community-based participatory research to understand what’s fueling the HIV epidemic among Blacks in Philadelphia and how certain conditions contribute to its spread.

“It’s just God’s blessing that I got to where I am now,” says Brawner.

An early experience with sexual abuse and despair left her “broken” and wondering whether she would ever make it through school or even through life. But Brawner — the first in her family to graduate from college — did make it. She is an assistant professor of nursing in the Center for Health Equity Research at the University of Pennsylvania and in the Center for Global Women’s Health at the university’s School of Nursing.

Brawner was in her first job as a neonatal intensive care unit nurse in Philadelphia when she started taking notice of the number of adolescent mothers who had their toddlers in tow while coming to visit their sick infants. She not only wondered why they were “interested in sex at such a young age, but also engaging in unprotected sex.”

Those questions, says Brawner, an independently funded biobehavioral scientist at the university, propelled her current research and clinical practice. She is working on providing culturally sensitive and age-appropriate HIV/AIDS prevention programs for adolescents with mental health and substance abuse disorders. That research is funded by the Centers for Disease Control and Prevention. Since 2006, Brawner has been the principal investigator on five research projects.

As a graduate student and young researcher, Brawner was a standout. In 2009, she became the first University of Pennsylvania Distinguished Postdoctoral Fellow. It didn’t take long for Brawner’s research approach to impact the field.

“Dr. Brawner is among the leading nurse researchers, moving us away from the traditional, individualistic-centered approach toward a multifaceted and multilevel, population-centered approach,” says Afaf I. Meleis, the Margaret Bond Simon Dean of Nursing at the University of Pennsylvania School of Nursing.

As a nurse-educator, Brawner’s commitment to teaching and mentoring extends to the next generation of scholars, clinicians, policymakers and community advocates. On and off campus, Brawner is a sought-after faculty adviser for students in nursing and in public health disciplines.

It’s not uncommon to see a line of students forming at Brawner’s office door, says Patricia D’Antonio of her spirited young faculty member. “She has even taken some students from Temple University under her wing,” adds D’Antonio, chair of the Department of Family and Community Health. The department in 2011 recognized Brawner for her excellence in teaching.

“My life,” says Brawner, “shows that we don’t have to be a product of our environment.”