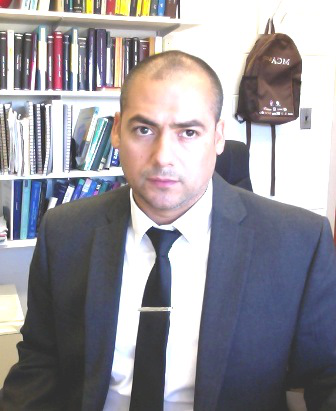 Dr. Eduardo González says new faculty members need to find a true balance of their obligations: quality teaching, service and scholarship.Dr. Eduardo González’s parents never attended school because they had to work in the agricultural fields of Mexico. They were in no position to provide any guidance to their son as he made choices about his own schooling.

“I was always trying to do what felt right because I never had that influence,” says González. He found his way into a science-oriented high school, where he fell in love with mathematics and physics. He enrolled in a Mexican college that also specialized in science and technology.

A Mexican mathematician who completed his Ph.D. in the United States helped González understand in the late ’90s that he too needed to follow that path in order to be on the cutting edge of math. Gonzalez arrived at Stony Brook University in 1999 and plunged into his doctoral studies.

González has emerged exactly where he wanted to be, doing high-level research on theoretical math that has attracted the attention of his peers and federal grantmakers.

“What I do is pure mathematics with applications toward physics,” says González, who arrived at the University of Massachusetts Boston in 2008 as an assistant professor of mathematics.

González’s research involves math several levels beyond calculus. His work does not have immediate practical applications, but neither did Newton’s discovery of gravity. González’s specialty is trying to understand how objects exist in a theoretical space with 10 dimensions instead of three. The answer could have universal meaning.

“For instance, a basic question is, What is the shape of the universe?” González asks. “Does it make sense that the universe has any shape at all?”

Those are difficult questions, he says, because the universe is so large and humans exist within it.

“Perhaps we are trapped in small dimensions, and that’s why we only can perceive three-dimensional objects,” says González, who is now a tenured associate professor. “The other dimensions are either too big or too small for us to really perceive. We have no idea at the moment. This is what occurs in this type of science. You create models that explain physical phenomena. At some point, experiments can verify or refute the theory.” To explore such a model requires combining several types of math with physics.

“One thing that’s special about Eduardo is he has a very broad view of mathematics,” says Dr. Eric L. Grinberg, chair of the Mathematics Department at UMass Boston. “He has the gift to see connections and tie things together that go beyond into other fields. It’s a reason a lot of people are interested in his work in this country and other countries.”

González’s students benefit, too. “When he teaches classes, no matter what the subject, students get a perspective of mathematics as a whole and also going beyond mathematics,” says Grinberg. “They see a smooth spectrum that is related.”

In 2011, González paired with a computer scientist on campus to win a hard-to-get grant from the National Science Foundation to study protein structures. No math professor at UMass Boston has won such a grant in years.

“He put the department on the map,” says Grinberg. “Other people (in the department) apply, and (his) name rings a bell (to the grantmakers), and they have a better chance because he was successful.”

A son of unschooled farm workers leading the way into the frontiers of theoretical math and science was not at all predictable.

“People have told me it’s actually strange to see a Mexican trying to do these things,” González says. “We are not very well represented in sciences, this type at least.

“Most of my students, especially (from) underrepresented groups, ask, ‘What can I do with this?’ I say if they are really inclined to do sciences, they should pursue it.”