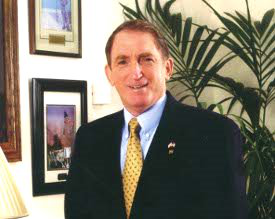 Birmingham-Southern College President Charles Krulak says that making diversity a priority at his school has its roots in his having spent the majority of his career in the military.

In the past, college presidents from other schools and college vice presidents have most often ascended the ranks to fill empty presidential seats. While this continues to happen about 19 and 25 percent of the time, respectively, other leaders like provosts and deans are increasingly being considered to fill the college president vacancies. Some schools even search outside the college community to find leaders from other industries that fit the bill. There is really no hiring formula that applies to all college president spots, and a “qualified” candidate could feasibly jump several levels of hierarchy to claim the spot.

Lately the academy has turned to former military officers to help lead their institutions. Recently, I sat down with Gen. Charles Krulak, president of Birmingham-Southern College, to speak to him about how he used his distinguished career in the U.S. Marine Corps to transition to a successful career in academia.

Q: What drove your decision to enter academia following your military career?

A: I did not actually join academia right after my military career. Rather, I first became the chairman and CEO of an international bank. Then I joined the board of a professional football team here in the United States and a professional soccer club in the United Kingdom, as well as the boards of Union Pacific and Freeport-McMoRan Copper & Gold. It was only after all those activities that I realized that what I missed more than anything was the relationship I had in the U.S. Marine Corps with the young men and women of today. The desire to reconnect with the next generation of leaders led me to seek a college presidency.

Q: Why did you choose Birmingham-Southern College?

A: Interestingly, I had never even been to the state of Alabama, nor had I ever heard of Birmingham-Southern. My name had come up in presidential searches for three other colleges or universities when I was invited to visit the city of Birmingham on an unrelated matter. While I was here, a friend who knew I was looking for a new challenge told me about BSC, which was currently looking for a new president. My wife and I visited campus and we spent six hours on an individual tour in which we replicated all the activities we had experienced while going through the interview process elsewhere. At the end of those six hours, we knew without a doubt that BSC was the place for us. Why? First off, the quality of the students. We found great young men and women of character who were clearly more driven to serve on Main Street than to profit on Wall Street. Second, we met a remarkable, selfless faculty who truly believes that the education they provide can and should be life-changing. Third, I encountered a staff who clearly saw that their main purpose was to serve the student and the faculty members who teach the students. All in all, there was a unique sense of family that I found at no other campus.

Q: How has your military background influenced your presidency?

A: As a military officer, I spent a lifetime around men and women who truly reflected the diversity of our nation. While BSC is a welcoming campus that has always strived for diversity, when I arrived, I didn’t encounter the magnitude of diversity I was accustomed to. That has now become a priority for the whole college, and we’re taking proactive steps to address the situation. Although we’ve just started out, we’ve become a more representative campus in a very short time, and that includes students, faculty, and staff. For instance, in the class that matriculated this fall, 22 percent identified as Asian American, Hispanic, African American, Pacific Islander, Native American, or multiracial.

Another thing: the military is often seen as a very hierarchical organization with little room for consultation or discussion. The reality is totally different. And so I’ve tried since arriving at the college to make sure communications remain open and to strive for transparency and informed debate, especially between administrators and the faculty. I really want to make sure I get input from the broadest possible perspective, especially as we shape the college’s future.

Q: What can higher education learn from the military, and vice versa?

A: The biggest takeaway is that, at the end of the day, character counts. The effectiveness of a professor or a staff member — or the president! — is directly related to her or his strength of character, moral courage, and integrity. We need to remember that our role is not just to prepare students mentally, but also to develop their strength of character, for that’s what will sustain them when they’re in the “real world.” The military, on the other hand, could learn a lot from higher education. From an administrative perspective, higher ed. has shown me how to slow down and value the process, especially when it comes to shared governance. From an educational one, we need to remember that there’s a huge difference between simply training young people—that is, loading them up with specific knowledge—and truly educating them to be critical thinkers, problem-solvers, and connectors of ideas. That’s what colleges like Birmingham-Southern do so well, and it’s why the U.S. will continue to be a leader in innovation well into the future.

Q: As a former member of the Joint Chiefs of Staff, you’re clearly a strong leader. What do we need to do to create the next generation of leaders?

A: First off, I believe that leaders are made and not born; that you can in fact learn leadership. Also, leaders must have a foundation, and that foundation is a strength of character. Thus, as you’re developing young leaders, you must start with that foundation and then build it up from there. The specific traits, methods, and even “tricks” that help make leadership effective are nothing without that basis in character, which is why I feel that’s one of the most important things we help develop as educators.

Q: What do you like to do in your spare time?

A: What spare time? Seriously, along with my “day job,” I attend almost every sporting event, performance, and other event on this campus. I love being out there to support the students! And then there’s travel to visit alumni and spread the word about BSC in other cities. My wife and I love to read, do crosswords, and watch movies. But the reality is, at least 90 percent of my time is spent on campus.

We would like to thank General Krulak for participating in this interview.