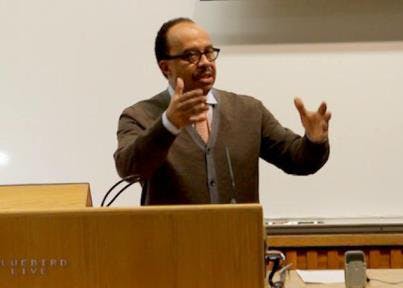 Dr. Anthony Monteiro’s bid for reinstatement has received backing in the form of petition signatures of a number of prominent professors including Drs. Cornel West and Marc Lamont Hill.

A popular faculty member at Temple University is receiving widespread support among other academics across the country after his annual teaching contract was not renewed.

Dr. Anthony Monteiro, an expert on W.E.B. Du Bois, has taught in Temple’s African American Studies Department for the past nine years as a full-time, non-tenured instructor. But he says that he was recently notified that the university has ended his employment and alleges that it is retaliation for his outspokenness and his critique of Dr. Teresa Soufas, the dean of the College of Liberal Arts.

“This is nothing less than a retaliatory and revenge firing,” said Monteiro who spoke at a press conference in Philadelphia last week demanding his immediate reinstatement. “It is her getting back at me for my standing up to her bullying, pointing fingers at Black men, her authoritarian attempt to take over African American Studies and my taking the struggles for the life and integrity of our department to the Black community — those to whom we are ultimately accountable.”

Tensions between Monteiro and Soufas had been brewing for some time. Last November, he accused the dean of unfairly denying him of the opportunity to chair a doctoral dissertation committee after he publicly criticized her for placing the department into receivership two years ago and appointing Dr. Jayne Drake — a White scholar of American literature — as the interim chair.

“I think it’s a direct response to the battle we waged in the spring to get Dr. Molefi Kete Asante as the chair of the department over her objections,” Monteiro said at the time. “But it required a public airing of the situation in the department and that went way beyond anything she can personally tolerate.”

But Asante — who also has publicly clashed with Soufas in the past but was appointed chair by her after the department unanimously recommend him to the post last year — told Diverse last November that Monteiro’s allegations were simply not true.

“There is no link,” says Asante, who founded the nation’s first doctoral program in African-American Studies at Temple 25 years ago. “Non-tenure track faculties at Temple do not chair dissertation committees. The Department of African American Studies participates as a unit in the university and we believe that the practice of having tenure track faculty members on the graduate faculty direct dissertations is consistent with the highest standards of academic advisement, student progress and instructional excellence.”

Non-tenured track faculty member are reappointed year to year by the Dean, based upon the recommendation of the chair.

“The decision to hire a contract instructor is certainly one that would result from the recommendation from the chair of the department and would in no way be made by the dean independently,” says Ray Betzner, a university spokesman.

Asante could not be reached for comment, but in a recent interview with the Philadelphia Tribune, he said that the decision over whether Monteiro should be reappointed was made solely by Soufas.

“The dean writes the letter when she wants to write a letter about anybody in the department,” Asante told the Tribune. “Did she consult with me to tell me what she was going to do? Yes, she did. I didn’t provide any guidance at all. My position is he has a year to year contract and it’s up to the dean.”

Still, he did not pledge to advocate on Monteiro’s behalf and was dismissive of the professor’s claims.

“The thing you can’t worry about … [is] if somebody signs a [year-to-year] contract and then get[s] upset when someone says your year is up,” Asante said.

A number of prominent professors including Drs. Cornel West and Marc Lamont Hill have signed a petition supporting Monteiro’s reinstatement.

“I have been unjustly fired,” says Monteiro, whose employment is scheduled to end in June when his contract expires. “I have been publically spoken of as a non-entity whose teaching, scholarship and service have meant little, practically nothing to the university and the department. There are scores of people who can replace me, I’m told. After all, you don’t have tenure. But is that all there is to it?”