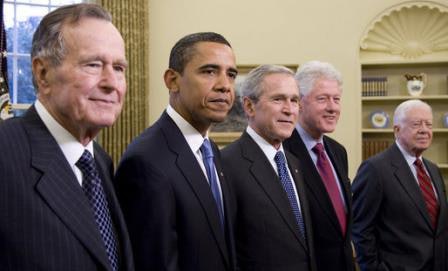 President Barack Obama and former presidents Jimmy Carter, Bill Clinton and George W. Bush will all speak at a three-day summit to honor the 50th anniversary of the signing of the Civil Rights Act.

President Barack Obama will deliver the keynote address at a three-day civil rights summit in Texas this week that will unite all of the living U.S. presidents in a rare gathering. The summit coincides with this year’s 50th anniversary of President Lyndon B. Johnson signing the landmark Civil Rights Act.

Dr. Harry Edwards, a sociology professor emeritus of the University of California, Berkeley, and longtime civil rights activist, isn’t surprised the event is attracting a Who’s Who of luminaries in politics, sports and the professoriate.

“Diversity continues to be an important factor in the course and direction of American society,” he says. “This is an opportunity to re-set ourselves and resurrect LBJ’s legacy.”

The summit, which begins Tuesday at the LBJ Presidential Library on the University of Texas at Austin campus, will examine the civil rights movement of the 1960s as well as issues of equality still facing the U.S. and the world today.

Three former presidents will deliver remarks at the event: Jimmy Carter will speak Tuesday; Bill Clinton on Wednesday; and George W. Bush on Thursday. The latter’s father, former President George H.W. Bush, is an honorary co-chair of the event. Obama will give the keynote on Thursday.

Mark Updegrove, director of the LBJ library, says the summit will celebrate the pivotal laws of the 1960s. The 1964 Civil Rights Act, along with the 1965 Voting Rights Act and the Fair Housing Act in 1968, helped establish the legal foundation for equality for all Americans.

“President Johnson’s vision for a more just and honorable America contributed to the most transformational civil rights legislation since Reconstruction and a crucial step in the realization of America’s promise,” says Updegrove. “But his vision went far beyond ending racial discrimination. He believed that education, economic opportunity, health care, clean air and water, and access to the arts and humanities were inherent civil rights for all Americans—and it’s reflected in his legislative legacy.

“The world has evolved considerably in the [past] half century,” adds Updegrove. “As our first African American president, Barack Obama is the fulfillment of the civil rights legislation.”

The summit will include panel discussions reflecting on the seminal nature of the civil rights legislation. Topics include immigration policy, music and social consciousness and same-sex marriage.

“President Johnson’s legislative achievements underscore for our students how society can be transformed by the efforts of those committed to a life of leadership in public service,” says Dr. Robert Hutchings, dean of UT-Austin’s LBJ School of Public Affairs. The summit, he says, offers “an opportunity to hear from some of today’s most prominent and distinguished leaders as our students prepare themselves to be the next ‘Get it done’ generation.”

Edwards, who’s in his 70s, is scheduled to moderate a panel on Wednesday on sports and civil rights titled “Leveling the Playing Field,” featuring retired basketball player Bill Russell and football running back Jim Brown, both of whom are older than Edwards and are enshrined in the Hall of Fame in their respective sports.

“This will be a conversation among three old dudes who don’t have much time left,” says Edwards. “But on a serious level, we’ll try to show how sports contribute to the whole civil rights picture.

“Without sport,” Edwards adds, “we wouldn’t have Barack Obama in the White House.”

Several speeches and panel discussions at the Texas event will be live-streamed this week. Details are at www.civilrightssummit.org