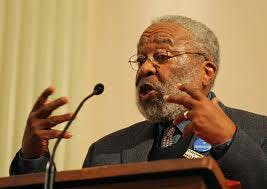 Dr. Vincent Harding was active in groups like the Southern Christian Leadership Conference (SCLC), the Student Nonviolent Coordinating Committee (SNCC) and the Congress of Racial Equality (CORE) in the 1960s.He was a renaissance man. A productive scholar, who wrote about the Civil Rights Movement, not as a distant outsider but as one who was intimately involved in the day-to-day struggles of Blacks in the American South.

By most accounts, Dr. Vincent Harding was prolific, penning classic texts such as There is a River: The Black Struggle for Freedom in America and Martin Luther King: The Inconvenient Hero even as he held down teaching positions at institutions like Spelman, the University of Pennsylvania, Swarthmore and Temple University.

But the classroom was his second calling.

Harding was primarily an activist, who lent his talents and energy to social justice causes, moving freely among the South and becoming active in groups like the Southern Christian Leadership Conference (SCLC), the Student Nonviolent Coordinating Committee (SNCC) and the Congress of Racial Equality (CORE) in the 1960s.

News of his death at the age of 82 came as a blow to the legions of activists and scholars who worked with him over the years. Yesterday, they paid homage to him as a movement man who tried to make a difference and end racial injustice.

“He was a gentle warrior,” remembered Dr. John Bracey Jr., chairman of the W.E.B. Du Bois Department of Afro-American Studies at the University of Massachusetts, Amherst, who pointed out that, despite Harding’s formal training as a historian, he was more of a theologian who was influenced early on by other religious thinkers like Dr. Howard Thurman.

“He knew all that theological stuff, but he never got into theological arguments with you,” said Bracey, who added that, throughout his life, Harding was a devoted Mennonite and a staunch believer in nonviolence.

Dr. Clayborne Carson, a professor of history and director of the Martin Luther King, Jr., Research and Education Institute at Stanford University, said that Harding was a friend and colleague of Dr. Martin Luther King Jr. and an occasional speech writer for the civil rights leader.

“He was indeed an invaluable contributor to the African-American freedom struggle and was one of the few remaining living links to the legacy of Martin Luther King Jr.”

Carson said that, during the 1960s, Harding and his late wife, Rosemarie, shared a close relationship with the King family and was selected in 1967 by Dr. King to draft the first version of his controversial speech “A Time To Break Silence” at Riverside Church where he publicly voiced opposition to the war in Vietnam. After King was killed, Harding worked with his widow, Coretta, to establish the Martin Luther King, Jr. Memorial Center in Atlanta and served as the center’s first director. Later, he served as the director and chairperson for the Institute of the Black World.

Throughout the Civil Rights Movement, Harding also was close to many of the SNCC activists, said Carson, and shared Ella Baker’s belief that self-reliant grassroots leaders were essential to overcoming the Jim Crow system of legalized racial segregation and discrimination.

Carson said that he recently received a letter from Harding informing him that he was in the process of writing an autobiography about his life and work.

“We will never know what additional reflections Vincent might have provided about his unique journey, but, from the evidence of his heartfelt letter, we can be sure that his autobiography would have drawn attention to those he credited with loving him into life: the mother who raised him, the wife who sustained him, his brother and companion Martin King, the sisters and brothers of SNCC, the grassroots leaders who risked their lives to transform the South, and 21st century community organizers such as Grace Boggs,” Carson said. “I will miss Vincent, and he will be missed by many friends and admirers who remain dedicated to his mission of achieving a just and peaceful future.”