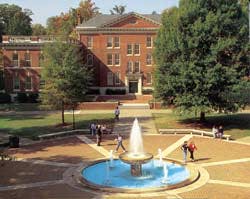 Randolph-Macon CollegeEric Cantor had his doubts as to the viability of a professor as a legitimate contender for Congressional office. At Virginia’s 7th District Republican Convention on May 10, before an animated crowd, Cantor questioned whether an academic could handle the stresses of Washington.

“It is easy to sit in the rarefied environs of academia, in the ivory towers of a college campus, with no accountability and no consequence,” said Cantor. “When you throw stones at those of us who are working every day to make a difference, it’s easy to say that you’re going to stand up to Obama and the left-wing attack machine.”

Yet voters in the 7th District did not share Cantor’s dim view of academics. Cantor’s opponent, David Brat, a professor of economics and business at Randolph-Macon College, in Ashland, Virginia, handily won the 7th District open primaries on June 10. The upset was all the more shocking given that Cantor had won the past seven races for the seat.

Now not one, but two professors from Randolph-Macon College will fight it out for Cantor’s seat in November. John Kent Trammell won the Democratic nomination at the 7th District Democratic Convention the weekend prior.

The two professors represent the opposite ends of the political spectrum. Brat is a favorite of the local Tea Party constituency, a scholar of Ayn Rand and criticized Cantor for his supposed lax stance on immigration reform. Trammell is a professor of sociology and director of Disability Support Services at Randolph-Macon. He is also a prolific author of works such as Reflections of a Southern Gentleman Farmer.

Randolph-Macon is a liberal arts college, affiliated with the Methodist Church. The 1,300 students who normally attend the school have largely scattered for the summer, although a few remain on campus.

Since the college is small, “everyone knows everybody,” as John Rackey, president of the R-MC Young Democrats, put it. Brat garners attention from the student body for his charisma and the fact that he requires students attending his classes to wear business casual attire in an effort to prepare them for the business world. Trammell has a more muted presence on campus, according to Rackey, though he is also well liked. “Faculty and students can’t say enough good things about him,” said Rackey, a rising senior double majoring in political science and music.

According to the Washington Post, the two professors have a friendly, collegial relationship on campus.
Kelly C. Merrill, the current director of student transitions, has worked with both Trammell and Brat on various campus projects. As of next Monday, she will be the interim director of instruction, which governs the tutoring and mentoring programs, intersecting with Trammell’s purview as director of Disability Support. She says that she has worked with Brat making instructional economics videos.

Merrill sees the race as a unique opportunity to elevate political discourse in the U.S. “What I’m really excited about is that we have the potential here to see what a political race could be like with people really tackling issues in a thoughtful and intellectual way, and not have a contest of characters,” said Merrill. “We so often see political races dive and go into messy, frightening places. Because these guys know each other, because they have been colleagues- and they may continue to be colleagues- there’s a real potential here for them to not want to bash each other.”

While Cantor depicted Brat’s academic identity as a liability, Merrill believes that professorial gravitas is just what the Congressional race needs. “Because of their background as academics, they really know how to debate issues and not resort to character slams,” said Merrill. “It could be something we’ve never seen in politics before, in a positive way.

Joseph Boor, who graduated from Randolph-Macon this spring, thinks that Brat will keep the discourse calm. “He wouldn’t do the kind of things that Cantor did in the primaries. Brat isn’t that kind of person. He’s the kind of person that can say, ‘I don’t necessarily agree with you, but that doesn’t make you a bad person.’”
Though Boor never had the opportunity to take classes with Trammell, Boor took two semesters of micro-economics with Brat and worked as a research assistant for him. Brat also sponsored a student group, Millenials for F.R.E.E.dom, that Boor helped organize.

Will Randolph-Macon become a house divided over the contest between the two professors? By all accounts, the student body is not particularly politically active, but leans conservative. “Every presidential election we do mock elections, and historically it’s all gone to a Republican, except for 2008, when Obama won,” said Rackey.

Connor Kish, a rising senior and double major in communications and political science at Randolph-Macon, concurs. “There are portions of the student body that are politically active. It probably leans conservative overall. I would say that the faculty probably trends more liberal,” Kish said in an email.

All was quiet on campus on the night of Brat’s win. “I don’t think most people really realized it until it was the morning, on campus anyway. On social media, everything blew up,” Rackey said. “People who have nothing to do with politics normally are all ramped up.”

Signs of greater interest in this political race have emerged on campus already. Soon after Brat won, a Randolph-Macon Republicans Facebook page went live. “Dr. Brat’s message of free markets, limited government, and upholding the Constitution is one that will resonate with young people. We are excited to help his campaign in any way we can,” said Michelle Pope, a rising senior majoring in communications, in an email.

As the national spotlight turns towards the small college of Ashland, Va., Rackey says he anticipates more students will become politically engaged. “Most students here aren’t that involved and up to date on current issues, but I think that with all the media attention and with all the reporters calling around and asking questions, people are going to want to be more informed, which is a good thing.”

Anticipation for what is already a historic race will only continue to grow as the two candidates venture forth from their “ivory tower.” Like Merrill, Kish hopes for an amicable campaign. “Politics aside, I think the campus community is very happy for Professor Brat and recognize the significance of his achievement. I’m hopeful they’ll run a clean race in general,” said Kish.