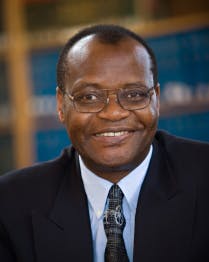 Muna Ndulo is a professor of law and director of Cornell University’s Institute for African Development.

As an international authority on African legal systems, human rights and development, Cornell University’s Muna Ndulo has keen insight into some of the conflicts and turbulent events that have dominated world news in recent months.

Ndulo is a professor of law and director of Cornell University’s Institute for African Development.

In 2009, he co-edited with Margaret Grieco the book “Power, Gender and Social Change in Africa,” a revelatory piece that explored issues related to the struggle for gender equality in Africa. In 2011, Ndulo published “African Customary Law, Customs, and Women’s Rights” in the Indiana Journal of Global Legal Studies, which examined how traditional, customary laws in many African countries were contributing to the continued oppression and abuse of women and girls.

Mistreatment of young women in parts of Africa became evident just as Ndulo was being interviewed by Diverse in early May. At that time, reports were beginning to surface about more than 250 Nigerian school girls being kidnapped by a terrorist group known as Boko Haram in order to prevent them from being educated. The kidnappers boasted that they intended to sell the girls to warlords.

The situation set off an international crisis.

In Ndulo’s 2011 journal article he stated, “The discrimination of women is rooted in inequality, male domination, poverty, aggression, misogyny, and entrenched customs and myths. The real solution to the problem is eradication of customs that undermine the dignity of women.”

Ndulo went on in the article to describe disturbing traditional practices in rural regions that perpetuated male dominance and oppression of women.

However, he tells Diverse that there is one underlying cause of the problems, not just in Africa, but in all developing countries.

“To me, the biggest challenge in the world and in Africa is addressing poverty and inequality,” says Ndulo, adding that “poverty is the breeding ground for terrorism.”

Any attempts to eliminate terrorism must be accompanied by efforts to combat poverty with economic development and human resource investment. Otherwise, says Ndulo, terrorist groups will continue to find recruits among youth who don’t have other opportunities.

With law degrees from the University of Zambia and Harvard Law School, and a D.Phil. from Oxford’s Trinity College, Ndulo served as a prosecutor and dean of the law school in Zambia before becoming a United Nations adviser and consultant. Currently, he teaches the legal aspects of foreign investment in developing countries and the common law and African legal systems to international organizations and human rights institutions.

Ndulo “is beloved at Cornell,” says Elizabeth Brundidge, a visiting assistant clinical professor of law and executive director of the Avon Global Center for Women and Justice, where she works with Ndulo, who is a member of the steering committee. “He is an extraordinary scholar, practitioner, teacher and colleague.”

Others at the university apparently share similar sentiments. In 2012, Cornell honored Ndulo with its annual Award for Excellence in the Teaching, Advising and Mentoring of Graduate and Professional Students.

Born and educated in Zambia before studying at Harvard and Oxford, Ndulo has maintained academic and professional ties to the country and to the region. He served as dean of the School of Law at the University of Zambia and continues to speak about politics and policy in his native country. When he was interviewed last November by Zambia Reports, Ndulo called for the repeal of a controversial Zambian law regulating nongovernmental organizations, calling the NGO Act of 2009 “unconstitutional.”

He tells Diverse, “The Zambian government is trying to completely control and undermine the independence of the NGOs in Zambia. This is because the regime is increasingly unaccountable and does not want any opposition to its rule.”

Several years ago, when Somalia accepted a United Nations proposal to transition to a parliamentary form of government, Ndulo served as a consultant to the U.N. for the transition. He included five Cornell law students in the process.

“We are fortunate to see Africa growing and we need to sustain that growth,” says Ndulo, adding that the U.S. and international community should play a more robust role in economic investment, education of women and human resource investment.

Cornell law professor Robert Hockett says Ndulo is in high demand internationally as an adviser and consultant because of his experience “helping to protect human rights, establish the rule of law, and ­put in place … sustainable prosperity in the world’s developing nations.”­