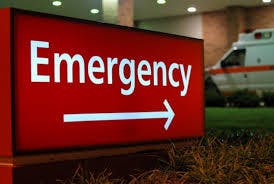 LOS ANGELES ― Emergency room visits among the state’s newly insured poor are high, but decline quickly after a year, according to a new study by the University of California.

The research could offer hope to those who worry that the expansion of health coverage under the Affordable Care Act will not ease emergency room crowding as President Obama and others have predicted, the Los Angeles Times reported Wednesday.

Study author and UCLA professor Dr. Gerald Kominski told the newspaper the results are good news. Patients’ long-neglected health problems are being addressed during the first year, he said, and because of that there’s a drop-off.

Researchers at the UCLA Center for Health Policy Research tracked about 182,000 Californians who entered county-run programs for low-income residents between 2011 and 2013. The programs were free or low-cost, and structured similar to Medi-Cal, California’s version of Medicaid.

The high usage dropped to 424 by the second quarter and 254 by the end of the first year, and then leveled off to a rate of 183 per 1,000 enrollees by the end of the second year, according to the research. Kominski said these findings should be encouraging for states seeking to expand their Medicaid programs because they prove that fears that the programs will bankrupt the state are unfounded.

California expanded Medi-Cal in 2014 and enrolled about 1.5 million newly eligible people. A Los Angeles Times analysis found that the proportion of emergency room patients in Los Angeles County covered by Medi-Cal grew from 32 percent in the first quarter of 2013 to 38 percent this year, and that emergency room visits in the county overall increased by about 1 percent in those first three months of expanded Obamacare coverage.

It’s unclear whether expanding coverage alone will permanently reduce crowding in emergency rooms, said Dr. Renee Hsia, an associate professor of emergency medicine at the University of California, San Francisco. Emergency room visits have been increasing nationally for the past two decades, she told the Times.

Hsia published a different study Tuesday in The Journal of the American Medical Association that found that between 2005 and 2010, children’s emergency room visits in California increased across all insurance groups.