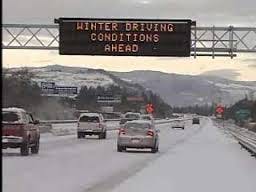 JANESVILLE, Wis. ― It happens every year.

People who were perfectly fine driving on snow at the tail end of winter go sliding all over the streets and highways when the first snowfall makes things slippery the next winter.

Do people forget how to drive?

On the other hand, it might be that those cars you saw in the median or slammed into utility poles this week were there for quite different reasons, says UW-W psychology professor Daniel Stalder.

Havas studies how the brain learns to control actions in varying situations—say, driving on icy streets versus dry pavement.

He also grew up in Colorado. More on that later.

“When the streets are dry, your brain can control your car safely in most circumstances while moving at the speed limit. But snow and ice change the sensory-motor dynamics, and your brain needs time to learn (or relearn) them,” Havas wrote in an email.

Havas demonstrates this in the classroom, where he has students wear goggles with lenses that fool the eyes into thinking the world is off-center by a few degrees.

Result: Goggles-wearers stumble around as if drunk. It takes several minutes for their brains to adjust to this new view of the world. Then they’re fine.

But when the goggles come off, the wearer becomes “tipsy” again until the brain re-adjusts.

So even if someone walks around for years with “normal” vision, a few minutes of altered reality requires time to re-adjust.

A similar dynamic might be at play in the brains of people who have been driving without snow for eight months, Havas said.

Havas said the learning lag might be even longer because of the way modern cars are built.

Seeing snow on the ground is a cue to adjust your driving, but today’s cars are designed for comfort. They have heated seats, a quiet cabin, coffee cup holders and surround sound.

“All these little luxuries make driving more comfortable and pleasant, but they may also be subtly preventing our brains from adapting to the new driving conditions outside of the car,” Havas said.

“Although I haven’t been able to find any statistics, all of this suggests that we might predict there would be more snow- and ice-related automobile accidents after the first few days of snowfall than after the later ones, even among experienced snow drivers,” Havas said.

Stalder, whose expertise is in social psychology, said bad winter driving might be about something other than forgetting how to drive or stubbornly ignoring an icy road.

For example, maybe the “bad” driver just moved here from the South, just recently learned to drive; or the ice on the road is so slick that no one could traverse it safely; or the driver was distracted by passengers, a radio broadcast or a cellphone.

“You can still beep and be upset at bad winter drivers, of course. I’m not telling you how to feel or act on the road. I’m just saying that there are usually multiple factors in play for most human behaviors and that most of us usually don’t realize it,” Stalder added.

So, what’s a driver to do? Havas suggests people consciously retrain their brains. It’s something he did in his formative years in snowy Colorado.

“My parents taught me to test the conditions before driving out in snowy weather by trying some maneuvers in our cul-de-sac. I’d abruptly accelerate from a stop and then step on the brakes after a few feet just to see how much traction I could expect on the roads. It’s likely this helped my brain determine the context and adapt more quickly to the conditions.

“At least, I was never in a major snow-and-ice-related accident.”

This is an Associated Press Member Exchange shared by The Janesville Gazette.