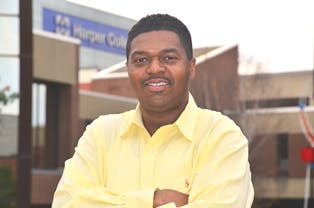 Darnell Windmon is one of two Faculty Fellows at Harper College in Palatine, Illinois. He is currently teaching in the Math Department.Becoming a college professor was not in Oubria Tronshaw’s career plans as she made her way through college. She dreamed of being a creative writer, not an English professor.

This semester, though, you’ll find Tronshaw teaching English composition at Harper College—a community college located in Palatine, Illinois, one of Chicago’s northern suburbs. Harper is, in some ways, far from where Tronshaw grew up on the city’s predominantly African-American South Side.

But Chicago’s northern suburbs are changing demographically, and Tronshaw is helping Harper as it tries to keep up with the changes. Harper is also helping Tronshaw burnish her credentials as a college teacher. Tronshaw is one of two newly minted master’s degree graduates in Harper’s Faculty Fellows Program.

Faculty Fellows enrich the learning environment on campus while they gain experience that likely would have taken years to build elsewhere as adjuncts. ­They also are bolstering the diversity of Harper’s teaching faculty.

“In the last 10 years, the community that we serve looks very different from what it did 10 years ago,” says Michelé Robinson, Harper’s assistant provost and special assistant to the president for diversity and inclusion.

As in suburbs around other major cities, minority populations are growing. ­The Hispanic population in the municipalities surrounding Harper jumped 38 percent between 2000 and 2010. ­The Black population climbed almost 14 percent. At the same time, the White population declined almost 11 percent.

Robinson, who arrived at Harper 12 years ago to teach early childhood education, witnessed this trend. When she became assistant provost in January, she began to look at the numbers and seek ways to “get the college’s workforce to more closely resemble our community,” she says.

As of June 30, Harper had 859 full-time employees, 18.5 percent of which were minority (African-American, Asian and Hispanic). Harper is not only trying to increase the number of diverse employees but is putting particular emphasis on administrative and faculty hiring.

Because Harper does not have a high faculty turnover rate, focusing on turnover was not a viable way to quickly change its faculty composition.

Instead, the diversity and inclusion task force turned to other ways to increase minority hiring. “We can be intentional about our hiring,” says Robinson, who reports directly to Harper’s president and works with the chief human resources director.

“­The district we serve is about 33 percent people of color,” but students see too few faculty members of color in Harper’s classrooms. “That disconnect is what, fundamentally, my office was designed to start addressing,” Robinson explains.

Now, the diversity and inclusion task force is in place to address that. The Faculty Fellows Program was among the recommendations the task force presented to the college president last year. It’s a way to move Harper toward one of its diversity goals: “exposing students to people who more closely resemble them and their experiences,” Robinson says.

Currently, Harper has two Faculty Fellows: Tronshaw in the English Department and Darnell Windmon in the Math Department. Before being accepted, they were interviewed by a committee and conducted a teaching demonstration.

The program offers them an annual stipend, full benefits and a professional development allotment of about $1,100. Fellows are paired with a content coach, someone in their respective department who is a seasoned, tenured, well-respected faculty member, “giving them exposure to what it means to be a professor at a community college,” Robinson explains.

During the first eight weeks of the program, fellows spend time observing other faculty members in the classroom. After that, fellows are assigned their own class. They receive regular feedback from peer observers who sit in the classroom while they teach.

A professor at Chicago State University, where Tronshaw, 34, received her MFA in creative writing in August, initially told her about the Faculty Fellows Program. After her third year working for the professor as a graduate assistant and temporary administrator, he told her, “This is not what you’re going to school for.” She agreed and put in her application.

Cut to a few months later, and it’s a few weeks into the fall semester. Tronshaw stands in front of her English composition class, leading them in a discussion about the Dan Millman novel “Way of the Peaceful Warrior.” She knows a peer is in the room observing her, which she says makes her a little nervous. But Tronshaw has her students’ attention and they respond with thoughtful answers.

When class ends, she takes a breath. Tronshaw seems pleased, and a little relieved, that it’s over—and went so well. She says later while sitting in her small office, “I’ve never taught a full semester like this.” Now, her first semester is nearing an end. Though teaching wasn’t what she set out to do, Tronshaw says she enjoys it. “This (experience) is making me want to teach,” she says.

Tronshaw also says that, even though Harper has given “everything they have to give me, I didn’t realize how much flying blind teaching is.” Because English is such a wide-open subject, she wasn’t prepared, she says, for the enormous responsibility of choosing assignments and topics and then having to adjust mid-course.

During their first semester, fellows teach one class, putting in between 30 and 35 hours a week. Both Tronshaw and Windmon live about 60 miles from the Harper campus. This makes for a long commute to the campus, located in what’s called the Golden Corridor because of its proximity to several Fortune 500 company headquarters, industrial parks and medical facilities.

Windmon, like Tronshaw, received a master’s degree from Chicago State University, located on the far south edge of Chicago.

Administrators from Harper and Chicago State worked closely over eight to nine months to develop the Faculty Fellows Program, says Robinson. The program’s success is important to Chicago State, too, she says. According to the Illinois Board of Higher Education, Chicago State enrolls more African-American students than any other college in Illinois.

Harper President Ken Ender says he spends a lot of time looking at internal data about Harper students and the district it serves. “Clearly, we are a changing district.”

The Harper College district has a total population of 531,565 and includes 23 municipalities. In the last five years, the number of Pell Grants awarded to students in the district increased 83 percent, and the number of students who are eligible for free or reduced school lunches is more than 50 percent in some municipalities. These are often proxy measures indicating the presence of more minority groups.

“There’s merit to adding diversity” to the faculty, Ender says. “We have done a fairly good job of attracting minority faculty and staff. We have had a disappointing time in retaining them.”

Assistant professor Stephanie Norris joined Harper’s English Department three years ago. She is the department’s only full-time African-American faculty member. She calls the Faculty Fellows Program a step in the right direction toward bringing “more members of color into the faculty body.”

Faculty leadership, which is majority White, have taken an active part in ensuring the program’s success, Ender says. They see it as “the right thing to do.”

Windmon, 40, had never heard of Harper until he learned about the Faculty Fellows Program. A former engineer who returned to school to earn a master’s after losing his job several years ago, he has found the colleagues in his department to be supportive. Eventually he would like to teach full time at a community college, he says.

That would be a good measure of the program’s success, says Robinson. “We will have been instrumental in making excellent candidates for somebody’s community college.”