State of Adjunct, Contingent Faculty May Be Higher Ed Bellwether 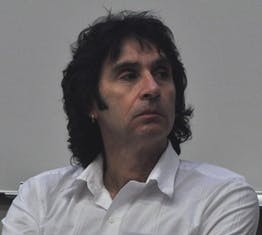 Dr. Andrew Ross, professor of social and cultural analysis at New York University, says education in the U.S. is turning into the “cruelest of debt traps.”

We all know about the “proletariat,” but what about the “precariat?” It’s a pun of sorts, designating the class of people who labor in academia in a permanently precarious state of employment—the adjuncts and contingent faculty who increasingly make up the majority of faculty at many institutions.

The travails of the precariat were at the center of a public conversation sponsored by the Albert Shanker Institute and the American Federation of Teachers in Washington, D.C., on Wednesday. Panelists sought to answer a weighty question: what does the loss of stable, well-compensated employment within academia mean for the future of higher education?

Their answer, in short, was “nothing good,” but, as always, the problem is far more complex than that.

Dr. Rosemary G. Feal, executive director of the Modern Language Association, first traced the history of the precariat, pointing to an abrupt divergence in institutional hiring practices. Since 1995, the number of full-time tenured and tenure-track faculty has barely budged, percent-wise. Meanwhile, the number of non-tenure-track and part-time faculty has dramatically expanded.

“The precariat academic workforce should always be at the center of all of our public policy, of our legislation, including the reauthorization of the Higher Education Act, loan forgiveness, and any other matter that has to do with faculty members in their positions,” Feal said.

To better illustrate the situation, Feal compared colleges and universities’ labor forces to an “iceberg.” The most visible members of the faculty—those “above the water”—are the tenured or tenure-track professors. Submerged beneath them are the larger body of “temporary,” non-tenure-track faculty who support and in many ways make possible the work of their better compensated and more widely recognized peers.

At the same time, those part-time, contingent and adjunct faculty are increasingly attempting to survive on incomes that hover around the poverty line. “Adjuncts survive often on public assistance. I’ve been on public assistance before—I could not believe this was happening to me. We’re talking about people who want to work and who can work,” said panelist Jennie Shanker, a Philadelphia-based educator and artist who is active in the United Academics of Philadelphia, an AFT adjunct union. She is the daughter of the late Albert Shanker, president of the AFT from 1974 to 1997 and for whom the institute at which the conversation was held was named.

By not paying adjuncts living wages, Shanker said, colleges and universities are passing the bill onto society to meet their employees’ basic needs.

Wrapped up in this problem of compensation is the accompanying issue of the ever-rising cost of college. If institutions are not turning that tuition money around into their faculties’ salaries, where is the money going, panelists asked?

Part of the problem is state divestment, they agreed. Dr. Andrew Ross, professor of social and cultural analysis at New York University, pointed to a recent announcement from the Government Accountability Office that has been somewhat overlooked.

“Last week’s big news here in Capitol Hill was of course President Obama’s proposal to fund community colleges from the federal purse. It kind of overshadowed another announcement, which was a report from the Government Accountability Office and an estimate from them that America’s public colleges now take in more money from debt-financed, student tuition, than they do from all other state sources,” Ross said.

According to the GAO report, tuition surpassed state funding in the 2012 fiscal year, amounting to 25 percent of public college revenue.

Others attributed the rising costs to higher administrative salaries, including those of high-profile presidents and coaching staff, that eat up millions of dollars from the budget. Providing the most current technologies on campus is also a costly endeavor, panelists said. Finally, building ever larger and more luxurious buildings on campus to cater to students’ desires for various amenities—or simply to raise the school’s profile—burden institutional budgets, panelists said.

Ross, who is a member of the Strike Debt coalition and helped found the Occupy Student Debt Campaign, spoke out against the ramifications of taking on a lifetime’s worth of debt in the pursuit of higher education. While he admitted that many would shy away from using the term “indentured” to describe the current student debt crisis—a debt total that has topped 1.3 trillion—he argued that the current situation many indebted students find themselves in is not in fact so distantly removed from indentured servitude.

“We have seen at least one or two generations of students, delivered now into a condition that some people would describe as akin to indenture. Now that is a very strong word, and people take exception to it. But actually if you consider the essence of indenture—you have to go into debt in order to labor—then it’s actually an accurate description, when it comes down to it,” Ross said.

In the United States, Ross said, education is no longer a public good, but rather the “cruelest of debt traps.”

“If you think about the righteous demands of the civil rights movement, one of the most righteous demands was that collegiate doors be open to minority populations,” Ross said. “If you take a step back and look at the structural response over the last 50 years, you would be justified in concluding that the right to education has been replaced by the right to access education loans.”

The best solution panelists could offer for adjuncts is to organize and unionize and, wherever possible, to organize with tenured and tenure-track faculty. By working together, the interests of the two groups would not inadvertently be pitted against each other. Shanker said that the first-ever grassroots campaign “National Adjunct Walkout Day” was being organized for early this year to bring attention to the plight of adjunct faculty and institutional reliance on numbers of underpaid, temporary workers.