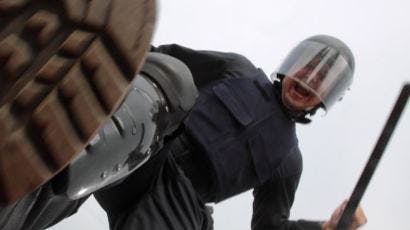 Reports of a Norfolk State University student’s attack by a police dog last week has again brought the issue of police violence against the African-American community to the forefront.

“The police relationship with African Americans has always been … a problematic, contentious relationship,” said Dr. Earl Smith, an adjunct professor of sociology at George Mason University.

Smith said people can become annoyed if one makes statements asserting a disconnect between police and the Black community, “but I’m thinking, ‘Who are you trying to kid? In the place that I grew up, police routinely beat up young Black males.”

Smith, who was raised in Long Island, New York, said he raised his sons in Tacoma, Washington, and still provided training on “driving while Black” and how to deal with the police if stopped.

The issue is not new, sociologists say.

In fact, said Dr. Ray Von Robertson, an associate professor of criminal justice at the University of Louisiana at Lafayette, “The relationship between African-American —Black — people and police has always been contentious as long as there’s been police.”

Robinson, like Smith, said part of the “common-sense training” for Black men in this country is training on how to deal with the police, a conversation that is not frequently a topic for other communities.

Dr. Cassandra Chaney, an associate professor in the School of Social Work at Louisiana State University, said it stems from a historical fear of Black men in this country (or at least a proclaimed fear). Citing police language that describes Black males as “big and overpowering” or describes scenarios where a Black man “charged” an officer, Chaney said “the whole language is couched in this [notion that] Black men are dangerous and they’re totally out of control.”

According to Robinson, the history extends back to that of plantation overseers, the first institution set up to police Black “citizens” in this country. Chaney agreed.

“Whites often set up institutions — and police were one of those institutions — that made it difficult for [people of color] to navigate” the social and political systems in this country, Chaney said.

“A lot of people probably don’t want to touch on this, but, I think largely, police are there to uphold the mandates of White supremacy,” Robertson said.

Indeed, throughout American history, some police officers, sheriffs, judges and even local and federal politicians (particularly throughout the South) were aligned with oppressive, racist factions. Police protected their rights to riot and local governments looked the other way as Black citizens were terrorized.

Beyond the institutional intent to uphold White supremacy, said Robertson and Chaney, there has historically been no accountability for White police officers who attack Black citizens.

“When has there been a time when police have received strong sanctions for harming Black people?” Robertson asked, adding that “common social sense” suggests that if there are no repercussions for an act, there is nothing to deter its recurrence.

Chaney agreed. “So few cases are even investigated,” she said. “Even in cases in which there is some type of financial judgment against the offending officer, it comes out of a settlement that is transferred to the taxpayer [via established defense funds] and the offending officer never bears the financial burden.”

Police officers can say, “‘I feared for my life,’” Chaney said, which serves as sort of a “get out of jail free card. As long as they say that, there are no real consequences for their actions.”

Smith pointed out that the foundation of the Black Panther Party, organized in Oakland in 1966 by Huey Newton and Bobby Seale, was largely in response to police brutality against Blacks in cities across the country.

In addition to a range of other social issues, the Party’s 10 Point Platform and Program said its members wanted “an immediate end to police brutality and murder of black people,” and “we want all Black people when brought to trial to be tried in court by a jury of their peer group, or people from the Black communities, as defined by the constitution of the United States.”

Less than two years later, following the assassination of Dr. Martin Luther King Jr., Smith said there began a slow introduction of Blacks onto police forces across the country as a means to contain and appease Blacks and control possible riots.

“And what did they do?” Smith asked of the police forces seeking to integrate. “They put [the Black officers] on the walking beat in the predominately Black neighborhood.”

Today, Smith said the relationship between police and the communities is “a seriously one-sided discussion that people are trying to tidy up” in light of recent current events.

But Robertson said not everyone necessarily wants to see the discussion changed. In addition to it being a race issue, he said, it is a class issue within the Black community itself.

Middle-class Blacks want to dissociate from the problem, believing a respectability doctrine — dressing well, being well educated and well spoken, avoiding the general appearance of trouble — will shield them from any conflicts with the police.

Recent headlines, however, have shown police aggression directed toward those who would not necessarily have been previously thought to be likely to end up in conflicts with police.

For example, Norfolk State student London Colvin will need more than 40 stitches and require plastic surgery after a police officer pinned her down and allowed a police dog to repeatedly bite her during a controversial arrest for disorderly conduct — an action Norfolk Chief of Police Michael Goldsmith has characterized as an “unreasonable” use of force.

Citing a Black president who should be the pinnacle example of a “good” Black person who would be shielded from racism from the establishment, and the failure of the establishments in the United States and abroad to show him the appropriate measure of respect, Robertson said he doesn’t think the relationship will improve any time soon.

It isn’t an issue of training, he said, but rather a mindset of Black inferiority and a lack of real accountability that drives the train of police brutality in the Black community, even in 2015.