Are historically Black colleges and universities still a viable enterprise? Of course, and more than ever, HBCU presidents past and present said at a presidential panel at Bowie State University on Thursday afternoon. Such a question detracts from the real question, which is how to bring them along in the 21st century with the greatest amount of success. 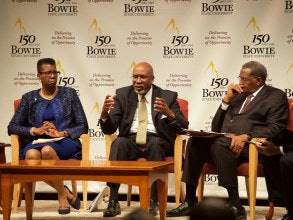 The panel, moderated by Diverse Executive Editor David Pluviose, considered key issues facing HBCUs and the best means of addressing them. All present on the panel agreed that the HBCU community is encumbered with great stresses and trials. But their necessity, according to Dr. Mary Evans Sias, retired president of Kentucky State University, is perhaps greater today than it ever was.

“If we weren’t doing (our work), how many people of color would you see in those professions?” Sias said.

In recent years, HBCUs have struggled with a serious loss of state and federal funding – when eligibility requirements for the Parent PLUS loans were tightened, HBCUs felt the pain acutely. But HBCUs one panelist was confident that HBCUs have turned a corner from those bleak days. President Obama and his administration have demonstrated their support, said Dr. George E. Cooper, executive director of the White House Initiative on HBCUs and former president of South Carolina State University.

“What I’ve heard President Obama say is that HBCUs must not only survive, they must thrive, in these times,” he said.

Other panelists acknowledged that HBCUs still had a ways to go. There are several issues that plague HBCUs. To name but a few – a lack of state funding, too-frequent changes in leadership, and a lack of alumni support. To combat these issues, HBCUs must learn to be “proactive rather than reactive,” as Sias put it.

“We have to be honest with each other, because we are in serious, serious trouble. There is a threat to our historic mission. We are all going through crippling state and federal budget cuts. There are threats to the academic program accreditations, especially for those of you in the South,” Pogue said. He cited other problems public HBCUs grapple with, such as increasing state mandated admissions requirements and performance measures that do not match with the historic mission of HBCUs. 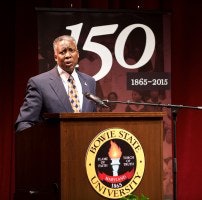 His history has given him great insight into the issues that arise with leadership changeover, particularly when it is not handled smoothly. “It’s amazing that we are so successful at finding leaders – and good leaders – for our institutions. But at the same time, they don’t stay very long,” he said.

Instead, they often seem to depart abruptly or in a cloud of scandal, leaving faculty and students blindsided. In an ideal world, Pogue said, presidents would announce that they were stepping down, and then remain onboard until a successor could be found and leadership change hands calmly and smoothly.

“When you have to leave in the ‘middle of the night,’ it’s very disruptive,” Pogue said. The minor scandals that tend erupt in the wake of leadership transition are also toxic to the image of HBCUs. Pogue cautioned HBCU constituents from being too eager to gossip or share stories with the media, since such negativity tends to damage schools.

Another overlooked facet of frequent leadership turnover is that charitable giving effectively grinds to a halt while alumni evaluate the new president. Alumni giving tends to be low at HBCUs, although Claflin has seen some success in that regard in recent years.

“When I came into this office… the entire first year I went around and the constant comment was, ‘we don’t give to interims, we don’t give to new presidents,’” said Dr. Rosalind Fuse-Hall, president of Bennett College, “Now, take [the example of] Pogue, he’s been an interim president [twice]. So that’s two years that [those] schools did not get support – major support.”

Fuse-Hall is a proponent of reaching out to alumni. Under her watch, Bennett’s Office of Institutional Advancement has reached out to 4,200 of Bennett’s some 7,000 alumnae. “For the last eight years, the alumnae of Bennett College have given back to their alma mater around $1 million, each year,” Fuse-Hall said.

Part of their plan, Fuse-Hall said, is to be proactive and communicative. Anytime anyone makes a gift, for example, they get an official thank you within 24 hours.

As a woman’s college, Bennett occupies a niche role within the HBCU community. Fuse-Hall said that she was disturbed by the recent news of the closure of another women-only institution, Sweet Briar College, but she is going to keep up the fight for Bennett. “I can’t get to the top from where I am right now, but I want to make sure that I am firmly in the middle -the outside ends usually get eaten up – until I can get to the top. Because I’m going to the top,” she said.