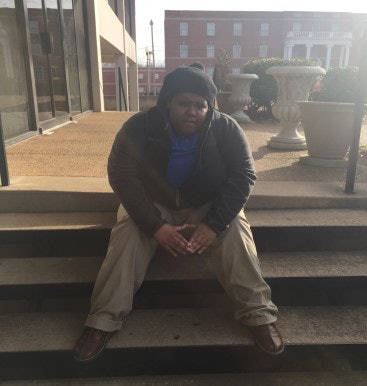 English Fields is a student at Rust College.

When English Fields decided to continue her education at Rust College—a small, private, Methodist HBCU in rural Mississippi—she had no idea what kind of ride she was in for.

During her first stint as a student, at Alcorn State University from 2007-08, Fields was timid and not willing to engage in conversation about who she was, preferring to keep mostly to herself. By the time she stepped onto the Holly Springs, Mississippi, campus as a second semester sophomore in October 2014 after a few years out of school completely, Fields says she was beginning to “be more comfortable being me: Openly gay.”

But Fields’ experience in her first year at Rust has not been smooth, and, along the way, she experienced a lot more personal transformation than she initially anticipated.

For nearly the entire school year, Fields—who identifies as lesbian but says she likes masculine pronouns because they make her feel powerful—battled what felt like a restrictive environment at Rust. From an African Diaspora professor who cracked insensitive jokes to a Biblical Studies professor who insisted on calling her “ma’am” and “Ms. Fields” (Fields prefers “sir” or her own pronoun title, “Kidd”), she struggled with the idea of not fitting in and even considered transferring to another institution several times.

“It got to the point that I said I would return to Alcorn the following spring or, as advised by a professor I took at Alcorn, try the University of New Mexico,” said Fields.  If anybody knows me, they know going to a [Predominantly White Institution] is not my thing. I set out to obtain my degree at an HBCU, and that’s my intended desire.”

It wasn’t just the professors; Fields said adjusting to peers was also a challenge.

“I’ve heard I’m known as ‘the big dike,’” she said. “They don’t know me nor my name (unless they look on my backpack) but just the ‘big dike.’ I don’t really pay attention to what people call me, especially if they do not know me, but I would hope that they would at least get to know me for who I am versus that small knowledge of me.”

“One roommate I’ve had (two left school, and I had the room to myself, until summer school) couldn’t stand the fact that I was a lesbian. [When] I moved in, she announced out loud how she didn’t want to be in a room with me. For a week [or] two, she made my life miserable,” Fields continued. “It started with the ‘well I don’t want you seeing me dress, because you may try to touch me.’”

After tiring of the passively-tossed gay slurs, Fields said she “ended up filing a complaint then moving out. It was just too much stress on me, and I didn’t want it to get out of hand.”

Slowly though, Fields said, she began to overcome the ignorance of others on campus and come into her own at Rust. She enrolled in a Fundamentals of Speech class and that proved to be a pivotal decision in the Rust experience.

“Mr. House, my speech professor, broke my silence and fear of the voice I had [inside of me] in that short amount of time,” she said. “If you’ve ever watched the episode of ‘A Different World’ when Whoopi Goldberg guest starred as the speech professor, then you’d know how my speech professor was. He always made sure we knew it was SHOWTIME in the HOUSE!”

“The first speech we did was [on] ‘the me that nobody knows,’” said Fields. “I could have [given] some dry speech about my major and all of that, but for people to understand me, and respect me, I did the unthinkable. I said who I was, my PGPs [preferred gender pronouns], what I’ve done, etc., which I think captured a few people’s attention. Of course I didn’t make eye contact and I read my whole speech, but still, I overcame that battle of saying who I was to a majority straight crowd.”

“Over the course of those eight weeks and 11 speeches my whole way of thinking and interacting with people changed,” she added.

Through the course of the year, Fields slowly became not only more comfortable with herself as an “out” LGBT woman and activist, but as a Rust College student—even in those classes that made her so uncomfortable in the beginning.

“I think Biblical Studies challenged me to rethink my place in society, believe it or not, and what I’m comfortable with doing. Not only that, but [it made me rethink] my view on religion,” she said. “Humanities challenged me to value life. Being taught by a professor that’s been teaching for almost 50 years, I had a lot of knowledge to learn and I gained so much respect from him with his life lessons.”

“Things didn’t go as planned for me to rush back to Tiger Land and take over. Was I upset? Yes.”

But despite being initially upset, Fields is no longer heavily anticipating her departure from the college. She is excited about returning to campus in July as a peer leader and is contemplating her future role on campus as an activist and leader. She’s even considering starting an LGBT advocacy group on campus.

“Sometimes life throws you lemons, and what do you do? Make lemonade right? I do feel like I’ve been making lemonade, and letting the cup run over,” she said.