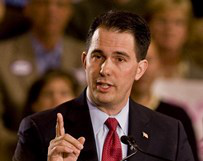 Wisconsin Governor Scott Walker Monday formally launched his campaign for the Republican nomination for President of the United States, touting his record on education as one of the key reasons he believes he is qualified to seek the nomination.

But recently, Walker and the state legislature have been in the news for putting an end to state-mandated tenure at the state’s public institutions, including the flagship University of Wisconsin at Madison.

Dr. Sara Goldrick-Rab, a professor of educational policy studies and sociology at the University of Wisconsin–Madison, has been one of the most outspoken dissenters of the policy. In an earlier interview, she clarified the idea that tenure meant anything other than job security in Wisconsin.

“I have not even enjoyed any raises. We don’t have any money. Those of us that have stayed in this crazy state with all of this political stuff and really low wages, considerably, have stayed because it was different and our voices mattered,” she previously said. “And they’re taking that away.”

In the same bill, which Walker officially signed into law Sunday, Walker approved an education budget that cuts $250 million from the University of Wisconsin’s budget and cuts funding to K-12 districts across the board.

In a July 3 statement, UW chancellor Becky Blank said of the then-proposed budget, “I am disappointed that the budget proposal coming out of the Joint Committee on Finance does not eliminate or modify the language around faculty dismissals to align with the standards of our peer institutions and the American Association of University Professors.”

“As with any university, our reputation depends on the quality of our faculty. Unfortunately, the inclusion of this language has created negative national publicity that will hinder the ability of UW–Madison to attract and retain the best faculty and staff,” she said.

Faculty around the country took to Twitter in response to Walker’s candidacy announcement.

“Not even watching Scott Walker because I hope for what he did to Wisconsin academics, he is destroyed in the primary races,” said University of Pennsylvania Associate Professor of Religious Studies and Graduate Chair in the Department of Religious Studies Dr. Anthea Butler.

Assistant Professor of Creative Writing at Fitchberg State University in Massachussetts Dr. DeMisty Bellinger-Delfield asked, “UW-Madison and the rest of the UWs lose so much here. What’s a state school without tenure?” and later said “Scott Walker cannot be president. He cannot do to the U.S. what he has done to [Wisconsin].”

Dr. Lisa Amor Petrov, Assistant Professor of Spanish, director of the Latino & Latin American Studies Program at Dominican University, said: “No one ‘needs’ tenure, but without it there is no academic freedom to research/speak about unpopular topics/findings.”

Even UW social media intern Kevin Castro wondered how a guy who had just made significant cuts to the state’s education budget could wave a dollar bill around and ask rally attendees if they wouldn’t rather put the money into their child’s school.