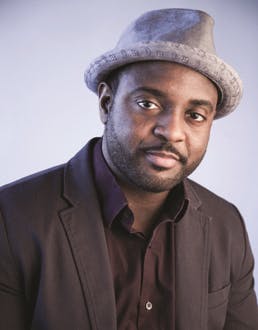 Dwayne Betts has many honors under his belt. He’s an author, teacher, poet, advocate and father and has obtained three degrees. His current pursuit, a juris doctor from Yale Law School, will further direct the life he’s cultivated over the past decade.

As someone who was imprisoned for more than eight years, Betts’ thirst for justice is unique to most of his peers at Yale.

“The law has a pervasive impact not only in my life, but in the lives of people in my community,” he says. As a law student, he’s able to think about problems conceptually—in a way that he would not have otherwise, he continues.

In 1996, Betts and his friend discovered a man sleeping in his car in a mall parking lot in Springfield, Virginia. The boys held the man at gunpoint and stole his car. In less than 24 hours, Betts was arrested and charged with six felonies. He was 16 at the time of his arrest and tried and sentenced as an adult.

“It really was just one incident—a combination of it being a Friday night, a gun being readily available and bad advice,” says Betts, who admits to having smoked weed and skipped class as a high schooler in Suitland, Maryland, but nothing as serious as that fateful day.

Betts, in fact, was an honors student who had been placed in gifted and talented programs at a young age. “A lot of teachers thought I was smart because I was in the talented and gifted program, so as a result of that, I had opportunities that I otherwise wouldn’t have had,” says Betts, who maintained a B average in high school.

Still, or perhaps because of his burgeoning intellect, Betts wasn’t challenged in high school.

With college a faraway goal—apart from what he described as probably a once-a-year conversation—he was “stuck in a state of inertia.”

During his time in jail, Betts used writing as an outlet. He wrote poetry. He wrote essays. “It was just me riffing and trying to understand the world,” he says. His first published piece was on the history, practice and rationale for trying juveniles as adults.

In 2005, Betts was released. He began working at Karibu Books in Bowie, Maryland, where he founded a book club for African-American boys. He also began his journey pursing higher education, beginning at Prince George’s Community College in Largo, Maryland.

“I like school and I didn’t have any readily identifiable skills,” he says. “And so going to college was a way to get some schooling and to prove something to myself.” It was also a way to establish himself as a student, intellectual, and academic in order to “battle with the conception that people would already have about who I am because I got three felonies.”

In 2007, he received an associate degree and then enrolled at the University of Maryland, College Park to study English.

It was at this time that he was approached to write his first book, A Question of Freedom: A Memoir of Learning, Survival, and Coming of Age in Prison.

The memoir was released in 2009 and was awarded the NAACP Image Award for nonfiction n 2010.

In 2009, he received a bachelor’s followed by a master’s in fine arts in poetry from Warren Wilson College in 2010. He also authored two poetry books in 2010 and 2015 and taught poetry courses on the K-12, collegiate and graduate levels.

A number of fellowships, such the Radcliffe Institute for Advanced Study at Harvard University, allowed Betts a space for research and writing.

With each opportunity, his key for advancement has been forming communities that have “sustained me and given me life,” he says.

Once he graduates from Yale this year, Betts plans to practice law, teach and advocate for issues including juveniles being tried as adults, employment discrimination, and high youth incarceration and recidivism rates.